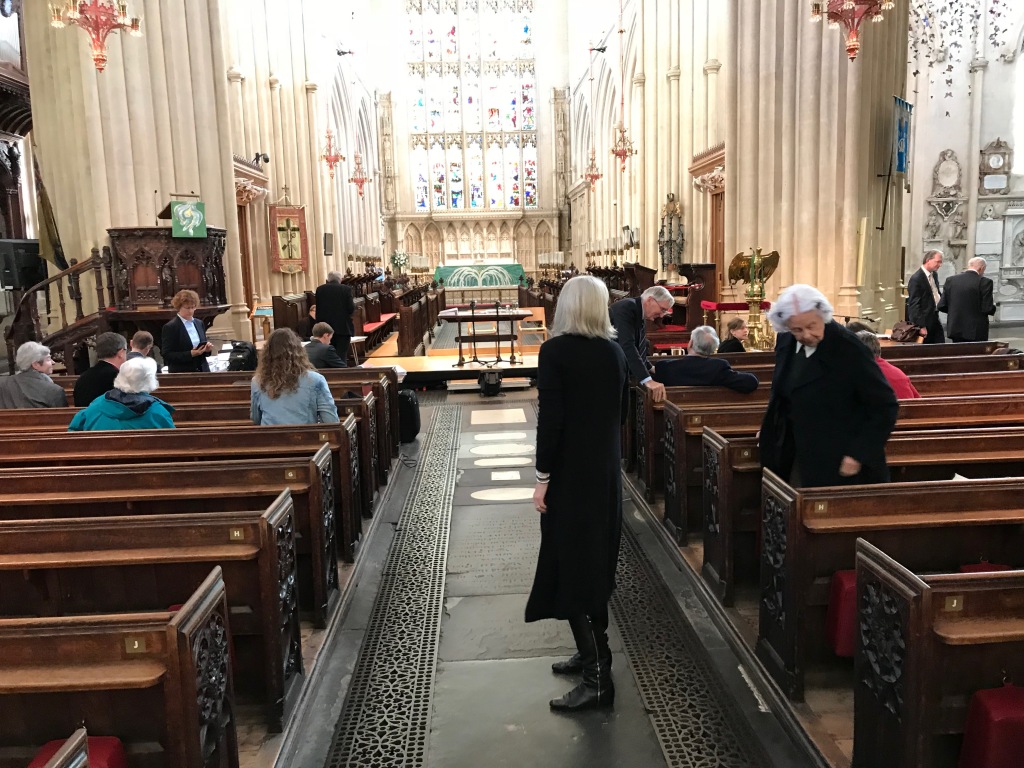 The one man l could not photograph was the man who sat behind the desk in the middle of the crossing. He is Mr Timothy Briden, the Chancellor of the Bath and Wells Diocese and the lawyer who has to make the final decision. His appearance meant this court was in session and no photography is then allowed.

Who would have thought that l would be sitting in a pew in Bath Abbey watching court proceedings unfold in front of the choir stalls!

However, dispell any image you might have of Rumpole of the Bailey at work –  though this was a bit of local church history in the making.

What l have been calling the ‘battle of the pews’ and a legal ‘confrontation’ between the Churchwardens of Bath Abbey and The Victorian Society in what the Church of England calls a Consistory Court hearing.

To bring you up to speed. The church has received a extremely generous grant from the Heritage Lottery Fund to help meet the costs of emergency treatment to the Abbey floor.

It’s money being spent on other improvements too, as part of the Abbey’s Footprint Project – the church’s ‘vision for the future.’

All those departed souls buried beneath today’s worshippers  – and visitors –  may have risen to heaven but they have left giant cavities in the ground which will need filling to stabilise things and stop the floor collapsing into the voids.

This will involve moving the pews – either side of the central aisle – and lifting all those amazing ledger stones that lie beneath them.

The church authorities see this as a golden opportunity NOT to put all those Victorian benches back – once the memorial stones have been re-laid.

This, they say, would not only reinstate the empty space this medieval building originally had at its west end but make it more flexible to the needs of modern-day worship.

It would also expose – for the first time in nearly 180 years – the hundreds of inscriptions to the ‘dearly departed’ that have lain hidden beneath the pews.

Bringing in chairs – when needed – would allow more flexibility for worship and with the added bonus of different configurations to accommodate everything from concerts and lectures to theatre in the round! It would – says the church – also make the nave truly accessible to all – whatever their level of mobility.

But those machine-tooled pews were designed by renowned Victorian architect George Gilbert Scott – the man responsible for St Pancras Station and the Albert Memorial. Removing them – the Society argues – would harm this Grade l-listed church’s historical significance and status.

There is also concern that, without the protection of the pews, the ledger stones would be exposed and subject to the footfall of about 450,000 visitors a year and possible damage from chairs being moved and replaced on them.

The Abbey argue fabric strips on chairs would ensure they did not do any damage and that the finer and more socially and historically-significant memorial slabs would not be relaid in areas of high footfall.

Bath Abbey is a medieval jewel but one that wasn’t ‘complete’ until Scott was called in to restore or re-order it. It’s a good example of a major church interior as reimagined by the Victorians in medieval style.

He installed the stone fan vaulting in the nave to match the existing medieval ceiling over the choir and chancel.

He organised a restoration of the West Front.

Inside, the screens that separated the chancel from its aisles were removed.  Windows were reglazed, memorial tablets attached to the pillars transferred to the walls of the aisles,  gas chandeliers erected and the present oak seating placed in the nave.

It was the first time this space had offered permanent seating and – with the chancel screen gone – opened the interior from end to end to enable it to be used for very large congregations.

Bath Abbey is probably unique in retaining so much of its Scott interior. An argument that hinges partly on the ‘ensemble value’ created by this famous church architect.

So here we sit – in a church bereft of its usual crowd of milling tourists – witnessing a little bit of ecclesiastical local history in the making.

The Church of England is exempt from the usual planning regulations. Changes proposed for its layout do not need to go before a B&NES planning committee.

However there is a built-in check on things – which can trigger a church court hearing. In this case it is The Victorian Society that has become ‘the party opponent’ to the Abbey’s plans to not put the pews back in the nave – once the repairs to the floor have been done.

So l – and around fifty Bathonians – are witnessing counsel for each party, in turn examining and cross-examining witnesses who have produced reports for and against the proposal.

For the Abbey it’s Mr Cain Ormondroyd and, for The Victorian Society ,Mr Mark Blackett-Ord who are appearing in front of the Chancellor of the Diocese of Bath and Wells, Mr Timothy Briden – who is himself a trained lawyer.

It is he who – in six weeks or so – will deliver his verdict and either allow or not allow the permanent removal of the pews to go ahead.

Proceedings are slow and methodical with the Chancellor stepping in now and again to help oil any legal difficulties or points that witnesses do not understand. Those watching events were also grateful to him for ordering breaks in the unfolding legal arguments for us to stretch our legs.

The irony wasn’t lost on me that the legal teams were seated on the sort of chairs that may replace the benches in question that – on this day –  bore the weight of us spectators.

The event was also a history lesson in the Abbey’s history. I hadn’t known the Victorians called the congregation’s seating arrangement benches and that to them pews were Georgian ‘boxes.’

How many knew that Gilbert Scott found the church pillars covered in memorial stones and removed them to the walls to get rid of the central clutter. Bath, apparently, is only surpassed by Westminster Abbey in the number of ledger stones it contains.

Memorials for men would display a shield above the wording and a diamond shape for women – l was told during a break in proceedings – but Scott’s workmen mixed some of those up when they were re-hung.

In the end – it seems – the Chancellor has to base his judgement on a point of law established in a previous church court case regarding a church in Derbyshire called St Alkmund’s.

It’s all a question of whether the ‘resulting public benefit’ outweighs ‘the harm to the significance of the church as a building of special architectural or historic interest?’

Do the benches ‘link the nave liturgically on a grand scale’ or should these wooden seats be seen as ‘an army of pews’ to be eradicated.

I am glad l am not the man who has to decide – after this two-day hearing.

in the meantime the Abbey moves on with its Footprint Project plans and a building contractor to do the work will be appointed – from a shortlist – by Christmas.