The public fountain in the middle of Laura Place is set to be restored thanks to a community project between Bath & North East Somerset Council and the City of Bath College. The fountain, which is in need of substantial masonry repair, has been a concern to residents and the Council for several months after the water pump failed last year.

The original fountain, which was erected in 1877, was designed by A.S. Goodridge, (the son of noted Bath Architect Henry Goodridge) and funded by residents. However by 1948 the central feature had become badly degraded and was subsequently removed, leaving just the circular stone basin. The present central fountain was then added in 1977.

The Council, Bath BID Manager and Pulteney Estate Residents Association (PERA) discussed the future of the fountain and it was agreed that a community project should be set up in order to restore it to working order.

The Council, through its Property Services Team, has since secured input and contributions from various parties to enable the project to be implemented. It has also arranged for a new water pump and electric cabling to be supplied, all at no cost to the Council.

Meanwhile the City of Bath College has agreed to take the restoration work on, which it will include in its teaching curriculum for stonemason students. The College has provisionally scheduled the work for January 2014 and once it is complete, the fountain can be returned to use. 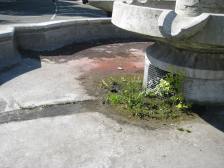 Councillor David Bellotti (Lib-Dem, Lyncombe), Cabinet Member for Community Resources, said, “The fountain has a proud place in Bath’s history, so Bath & North East Somerset Council alongside the Pulteney Estate Residents Association and the College is keen to organise its restoration.

“Although the aim is for future maintenance costs to be minimised, we are looking for other organisations or individuals who would be willing to consider sponsorship on an on-going basis. All contributors to the restoration will be acknowledged on a plaque to be fixed to the fountain once work is completed.”

There is already a plaque on the side of the fountain basin but l have no idea when the last restoration was carried out. I would love to known what the initials – repeated around the base – stand for?

Are you interested in sponsorship? Call the Council on 01225 477904 or email PALS_AdminHelpdesk@bathnes.gov.uk

Below is a clip from Set in Stone: The building of Bath which was filmed in 2002 for Carlton Television and shows the fountain in action!