Bryan Chalker is an ex B&NES councillor – and former Mayor of Bath – who is now getting used to the sound of silence.

Let me explain. He has had a ‘bee in his bonnet’ for some time now about getting the city to acknowledge a particularly poignant connection with the sinking of the passenger liner Titanic.

The Bath-born woman who – until her death in 1984 – was the oldest survivor to be rescued from that stricken ship.

Edwina ‘Winnie’ Celia Troutt was born on June 8th, 1884 at 40 Claverton Street, Bath and was also known to have lived at 13 Newark Street in the city.

She sailed from Southampton as a second-class passenger on board the Titanic on April 10th 1912 – bound for New York.

Four days later, the ship struck an iceberg, off the coast of Newfoundland, and began to sink. A total of 1,522 people lost their lives but around 713 survived – including Edwina who was rescued by the steamship Carpathia.

She eventually settled in America – married three times – and died at Redondo Beach, California at the age of 100.

Bryan – who was ‘Heritage Champion’ for Bath when he sat on the council – wanted that connection noted. He is already well known for promoting the city’s industrial past.

Did you know for instance that former local crane manufacturer, Stothert and Pitt – made eight cargo lifting cranes for the Titanic? Also resting now – with the remains of the ship – more than two miles below the waves and on the bottom of the Atlantic Ocean.

It’s not the biggest plaque to grace a wall in Bath but Bryan must be pleased that through his efforts – and a bit of crowd-funding – he’s managed to get a public recognition of Edwina Troutt.

You’ll find this plaque in aptly-named Newark Street ( the Stothert and Pitt factory was known as the Newark Works) in the Southgate Shopping Centre.

It may be small – but at least you can read it. Which brings me on to my next subject,

One of the reasons Bath has World Heritage status is its social history. Its popularity as a spa drew a lot of well-known people during the Georgian and Victorian periods.

Some visited, some lived here before moving on, and others retired to the city and died here.

Other cities – London, Edinburgh and even Bristol – had already decided to erect tablets on houses which had been occupied by well-known people.

Bath’s decision to pick up the idea was spearheaded in 1899 by another former ‘heritage champion’ –  Thomas Sturge Cotterell – a former mayor and alderman of Bath who also ‘founded’ the Mayor of Bath’s Corps of Honorary Guides! 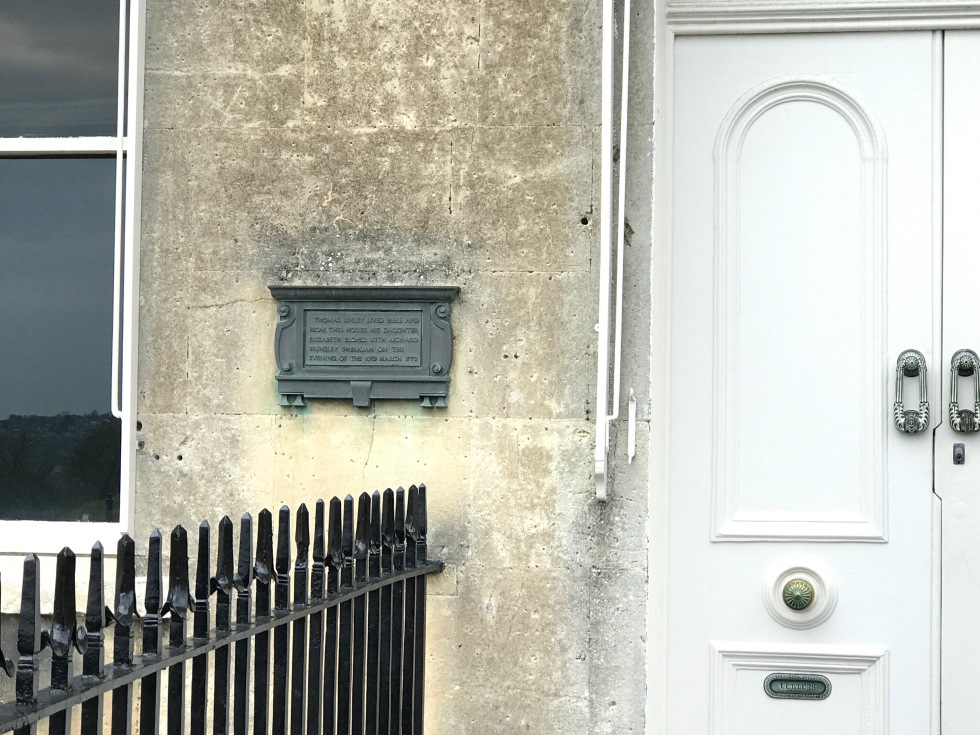 A keen local historian and city promoter, he persuaded the then Corporation to spend £250 placing 44 tablets ‘on houses once occupied by notable men and women in the 18th and 19th centuries.’

The first was dedicated to astronomer and discoverer of the planet Uranus – Sir William Herschel – and then other less well-known notables until – in 1900 – four more went up including the Woods, Jane Austen and William Pitt.

The plaques are in copper bronze and the design ‘in accord with the 18th century architecture of the city.’

Back in 1970, the then City Council was considering saving money by using blue ceramic tiles instead of bronze, but it was decided that ‘even apart from the question of cost it would be wrong to replace the present design and that any new ones should confer to the existing design in all respects.’

But it was agreed to make arrangements for them all to be cleaned – though l have no idea if that was done.

What l do know is nowadays very few plaques ARE readable.

Visitors are often loath to step on someone’s pathway to their front door in an effort to read what it says on the very dull and indiscernible tablet.

Isn’t it time to do a ‘test clean’ on one of the lesser known subjects to see if they can be  made more readable?

Maybe it is also time to think long and hard about reviewing just who IS over the door. Many of the ‘famous’ residents are unknown to today’s visitors.

Should we be looking for more recent occupants to honour now and, maybe, a different form of plaque which is cheaper and easier to read?

Let me know what you think.