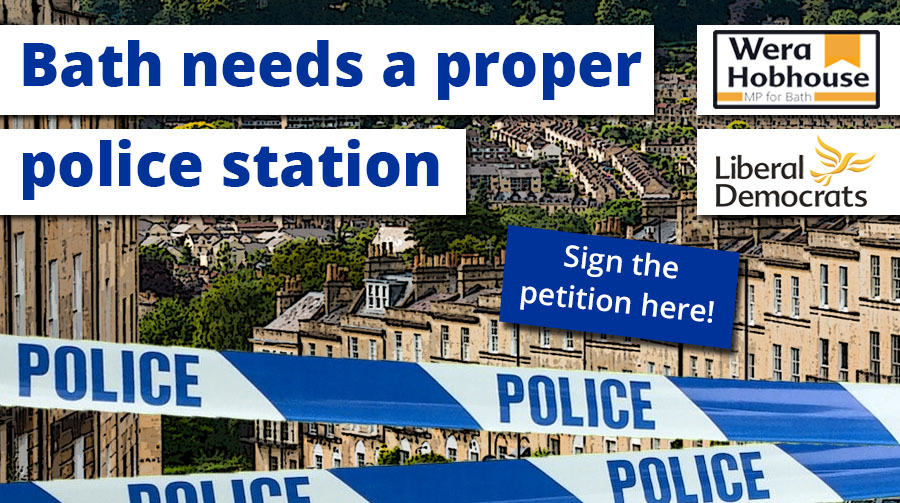 Bath’s MP Wera Hobhouse is joining forces with Lib-Dem B&NES councillors to campaign for the return of a proper police station for Bath.

Everyone who lives in, works or visits the city has a right to be safe. Every officer who serves in our police force should have the tools to do their job to the best of their ability.”

A petition has been launched – which also has the support of Dine Romero, the leader of the Lib Dem council group.

She added:  “Bath residents attach huge importance to having a visible police station in the city centre. There is a perception that the city is less safe than previously and that more people are falling victim to crimes.

Bath is a city of almost 100,000 people, which attracts millions of visitors every year. It’s not right that our police and residents are so under-resourced.”

Calls for a new police station appear to be coming from around the city – from officers inside the force, as well as community groups and political leaders.

Pressure has been rising on Sue Mountstevens, the Avon and Somerset Police and Crime Commissioner to act. In a recent interview with BBC Radio Bristol she apparently claimed that “Bath has a police station – it’s just on two sites”.

Her comments came at a time when the city is experiencing a rise in criminal activity, with sexual offences, violent crime and robberies all increasing.

A recent Twitter poll conducted by @KeepBathGreat indicated that 86% of Bath residents want to see a proper police station back in the city.

There is an on-line petition at https://www.werahobhouse.co.uk/proper_police_station

If you don’t do the internet, you can write in to Wera’s office at 26 Charles Street, BA1 1HU with your name and address, indicating that you would like to sign it!