Seems Bath Newseum is not the only online website – dealing with history and heritage – you guys check out.

However, one of my followers – Roger Houghton – has drawn my attention to the Oldfield Park Junior School (Bath) Memorial Project site for a reason.

The youngsters have been researching the whereabouts of a memorial dedicated to Bath policemen killed during the First World War.

A terrible conflict – so costly in human life – that is being especially remembered this year as 2018 is the centenary of the end of the so-called Great War. 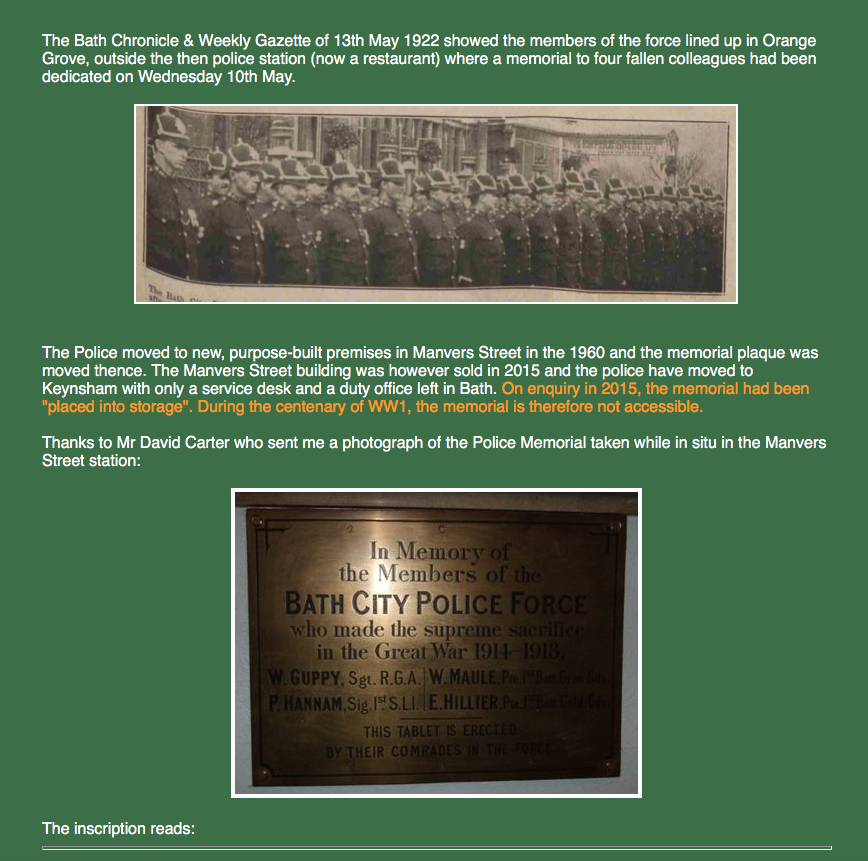 On the school’s website, they explain that a memorial had been dedicated to the men in 1922 when a brass plaque was unveiled at Bath’s original police station in Orange Grove which is now a restaurant.

The police then moved to a new purpose-built station in Manvers Street where they stayed until just recently when the building was sold to Bath University. Our local bobbies moved to a depot on the Lower Bristol Road and Oldfield Park Junior School – when they enquired –  were told the memorial had been ‘placed in storage.’

Roger asked Bath Newseum to check this out and suggested – with this being a special year – maybe the plaque should be re-hung outside the old police station in Orange Grove.

I contacted Jenny Bigwood at the police press office at the Avon and Somerset Police HQ in Portishead and she said she would see what she could find out.

Within a day or so she was back with this!

“I’m hoping this is the plaque in question? It’s on display at the Police Memorial Garden at our force HQ in Portishead, alongside the roll of officers killed on duty:”

What do Bathonians think? Should the plaque stay where it is or be brought back into the city?