An ensemble – featuring a printed T shirt – has been chosen as the Dress of the Year 2017 for the Fashion Museum Bath.

It was selected especially for the museum by Sarah Bailey of Red Magazine and features  an ensemble from Dior’s Spring-Summer 2017 collection that showcases the white cotton ‘We Should All Be Feminists’ print T-shirt. The T-shirt is worn with a black wool jacket and black tulle skirt with black knitted underwear. 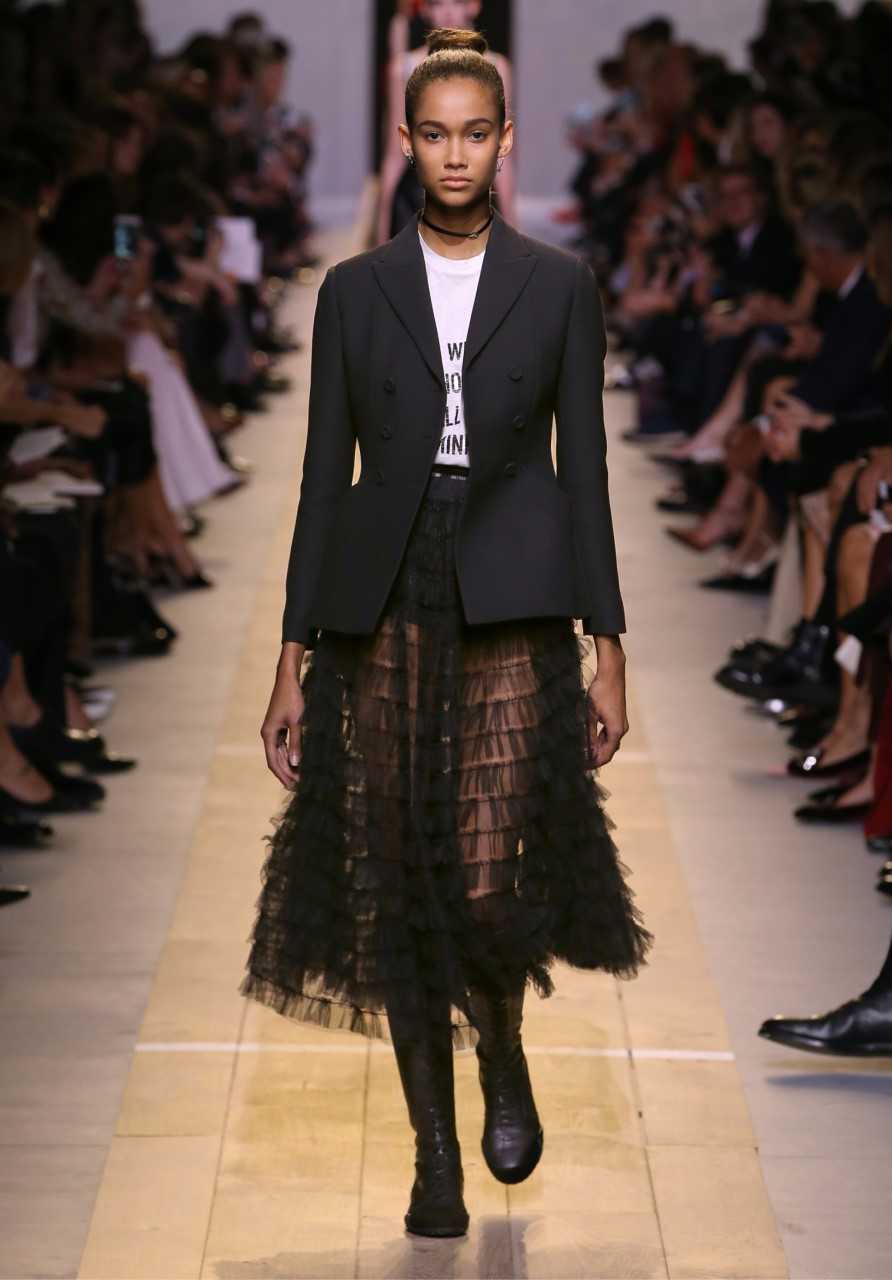 Throughout 2017 the T-shirt and its powerful slogan has been worn by a host of actors and recording artists including Jennifer Lawrence, Rihanna, Natalie Portman, Demi Lovato and even A$AP Rocky.

Sarah Bailey, Hearst Lifestyle Group Editorial Director, said: “I was very inspired by the appointment of Maria Grazia Chiuri at Christian Dior. She is the first female Creative Director in the history of the house and I admired the vigour with which she immediately started challenging the conversation around women, creativity and the gendering of genius. Her social media campaign (before we even saw any of her designs) #TheWomenBehindMyDress – hero-ing the petits mains in the Dior atelier – was brilliant, moving and completely on point.

“When I saw her first collection come down the runway it was – again – utterly uncompromising in its message. I loved the resolute strength of the models in their logo T-shirts emblazoned with Chimamanda Ngozi Adichie’s call to arms ‘We Should All Be Feminists’. All this and a beautiful interpretation of the Dior Bar jacket, a garment designed to take the modern woman of purpose anywhere.”

Maria Grazia Chiuri, Creative Director at Dior, said: “I am very honoured that you [Sarah Bailey] chose my Dior look for the Fashion Museum. My first collection is a synthesis of what Dior once was and what it is today. It’s a starting point: to communicate with today’s woman and to imagine the woman of tomorrow. I wanted to send a message to young women who consider Dior a symbol of femininity: this is their Dior, created with them, their energy and their desire to conquer the world, in mind.”

“I think a T-shirt, because it is so basic, is the easiest way to display your ideas. The slogan ‘We Should All Be Feminists’ takes over this blank space and plays with the political value of appearances. I’m glad that so many women saw my T-shirt as a way to claim their own position, their own role in society, to make their voice heard through this item of clothing. It’s quite an awakening also for fashion, and for what you can do with fashion. For me, the white T-shirt was a simple, direct and immediate means to say something loud and clear.”

Bailey continued: “When I was asked to make the selection for the museum, I was not only recognising the beauty and relevance of Maria Grazia Chiuri’s collection. When I looked at 2017 through the prism of history, society and politics, the Washington Women’s March of January 21, 2017 was front and centre in my mind. An empowering slogan T-shirt and a sharp jacket – of course! Whether protesting against the misogyny of Trump or speaking out about the predatory practises of Hollywood casting couch in the unfolding Weinstein scandal, 2017 was a year when women felt the necessity and obligation to stand up and be counted. Maria Grazia Chiuri’s collection distilled the moment – both right for its time and a statement that helps us define the time. A new look indeed.

“We should all be feminists.”

Councillor Paul Myers, Bath & North East Somerset Council’s Cabinet Member for Economic and Community Regeneration, said: “The ‘We Should All Be Feminists’ T-shirt ensemble is one of the most talked about fashions of 2017, by Maria Grazia Chiuri, in Dior’s 70th anniversary year. What a wonderful addition to the outstanding museum collection of historical and contemporary dress at Bath & North East Somerset Council’s Fashion Museum. We are most grateful to Sarah Bailey for her careful consideration and for making such an inspired selection for Dress of the Year 2017. Thank you too to Dior for so generously donating the ensemble to the Fashion Museum.”

The Dress of the Year Collection at the Fashion Museum began in 1963, when the museum was founded as the Museum of Costume. Since then, a leading commentator and expert on fashion has been invited each year to select an ensemble, or ensembles, from those shown by the world’s designers during international fashion weeks.