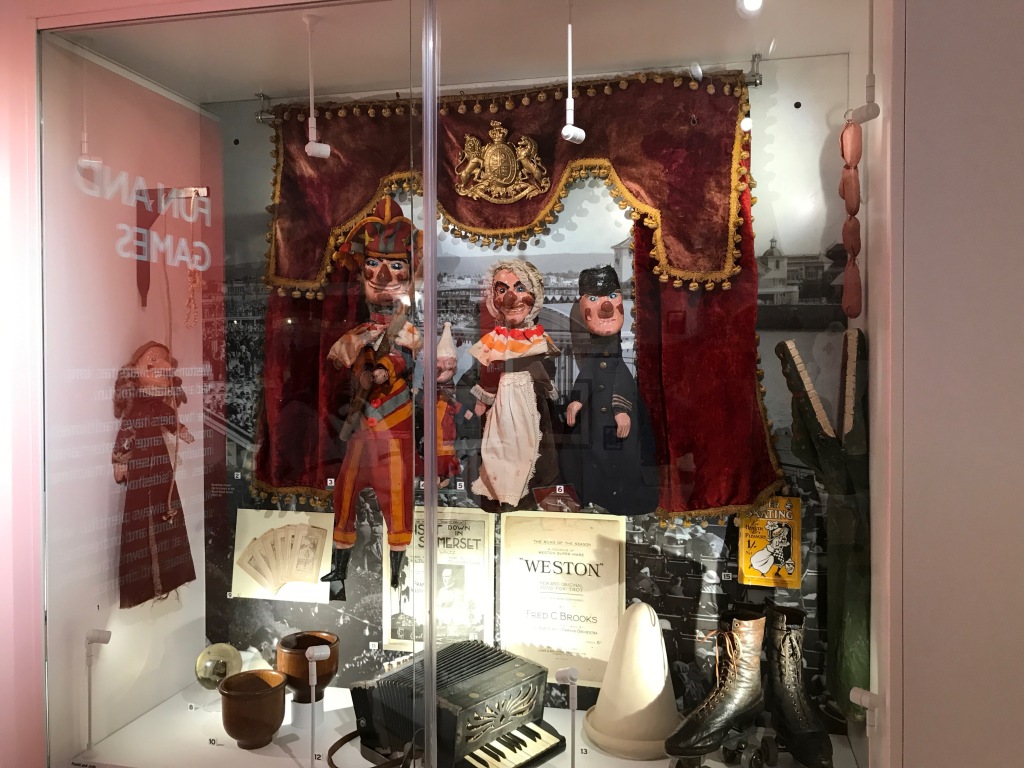 More than two and a half thousand people turned up last Saturday ( August 26th) to look around the newly-reopened town museum at Weston-super-Mare.

I know this website concerns itself with Bath but – as someone who claims that west coast town as his birthplace – l seized the opportunity to pop down and be shown around the place by the man who chairs the committee responsible for its rebirth – Cllr John Crockford-Hawley.

You’ll find the museum in the former Gas Company workshops in Burlington Street – a site it has occupied since 1974.

However, this is its third town location, as a museum has existed in Weston for 155 years – making it just ten years younger than the V & A and ten years older than Bristol City Museum.

The project has largely been covered by the Heritage Lottery Fund – which provided £346,000 more than the town council asked for – with further money coming from the Coastal Communities Fund, Garfield Trust and Arts Council England.

The building has been closed for two years to enable a new roof – with automatic opening windows – to be installed.

They’ve also added a lift to open up the second floor to those with disabilities and a cafe – selling local produce – is ‘in-house’ -allowing profits to flow back into the museum.

Donations are obviously welcome and there’s a bright little shop area – selling everything from local history books to china mugs and reproduction carbolic soap – adding to the all-important extra income.

Bright new display areas, new balconies and a re-configured staircase has opened up areas for exhibition and performance.

Most of the museum’s vast collection is stored at Taunton but there will be a regular flow of items – no doubt – to refresh displays.

I have to say having ‘less’ has turned out to provide ‘more’ in the way of impact. You no longer have to shuffle past past endless displays of  somewhat cluttered and drably displayed objects.

There is a real – brightly-lit and information-rich flow of artefacts which explore Weston’s long history – from primitive man to its ascendancy as a Victorian seaside resort.

As an ‘old boy’ myself – l have to say the ‘Wyatt smile’ widened with every new display that triggered memory and took me back – for instance – to the days of the Open Air Swimming Pool – with its gushing fountain and high diving board – or the bracing summer days of Channel cruising on the old Bristol and Cardiff Queens.

This little boy’s heart would beat fast as he ran down the once firm-planks of the jetty on Birnbeck Pier to board one of those wonderful smoke-belching Campbell steamers that promised Knickerbocker Glory ice-creams as soon as we docked – down Channel –  at Ilfracombe.

Community involvement is strong with sponsored woodblocks that you can purchase to help coat the museum floor and a special display area given over to groups and clubs in the town to promote their place – and history – in the town.

There were more memories for me of the penny in the slot automatons l viewed on the old Grand Pier. They were always depicting gruesome executions or ghouls rising from the grave – but you got a childlike thrill knowing there was glass between you and the stuff of nightmares.

Meet the ‘Lord of the Manor’ – a couple painted by no-less-than Bath-based Thomas Gainsborough himself – and lots of other canvasses depicting the town’s history in the first real Weston-dedicated gallery the museum has ever boasted.

I could go on but l want you to go look for yourselves. Burlington Street is a bit out of the way but there is now good signage and even little museum symbols on the pavement to guide you into the back streets from The Boulevard.

Details of opening ties and directions can be found on the museum website via www.http://westonmuseum.org

This is the biggest project the Town Council has undertaken and there are plans to start developing phase 2 of the museum which will bring in the rear courtyard, back of house areas and Clara’s Cottage.

Makes a refreshing change to say that here is a little gem that Weston-super-Mare can be truly proud of.