An exchange of artwork between Bath’s Holburne Museum and one of the Netherland’s oldest museums is on the cards following a town-twinning reception held in our Georgian city last night.

It was organised to help celebrate 70 years of international friendship – between Bath and the city of Alkmaar in northern Holland.

It was also the first public engagement for the Holburne’s new Director, Dr Chris Stephens.

He welcomed everyone to the museum and hoped an ‘ association’ might develop between the Holburne and the Stedelijk Museum in Alkmaar.

Forgive the sound quality of an impromptu recording.

Bath has been hosting a week of festivities for the Mayor of Alkmaar, Mr Piet Bruinooge and a delegation from the Dutch town.

The Bath-Alkmaar friendship goes back to the days of World War Two when a young Dutch Jewish playwright – Elias Prins –  escaped the advancing Nazis and ended up in Bath working as an air raid warden.

He quickly became a well-known local figure through the many talks he gave to community groups and schools about the plight of his people.

Bathonians – inspired by Eli and his new friends in the local Rotary Club – decided to launch its own Alkmaar Appeal – and with the blessing of the Dutch sovereign, HRH Queen Wilhelmina.

It makes Bath’s ties with Alkmaar the oldest official ‘twinning’ link of any which came out of the war.

At the Holburne reception, Professor Gwythian Prins – the Bath-born son of Elias Prins – was given an Honorary Membership Certificate of the Twinning Association and an Alkmaar Medal of Friendship by the Mayor of the Dutch town.

The Association has also arranged two Concerts to be held on Saturday 15 July and Sunday 16 July, featuring the fabulous Alkmaar Youth Orchestra with special guests, re-telling a tale of tragedy, daring escape and international friendship in music and readings, rounding off a week of Anglo-Dutch celebrations in Bath. 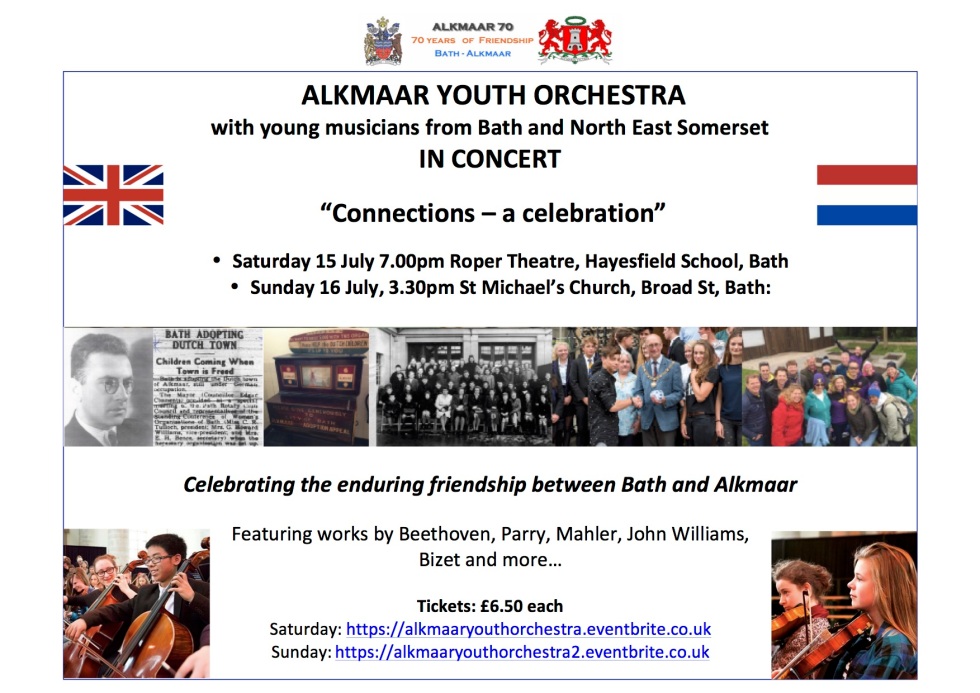 The Mayor (Councillor Ian Gilchrist) will attend the Concert on Saturday, and the Deputy Mayor (Councillor Rob Appleyard) will attend the family Concert on the Sunday.
Find out more about the Bath-Alkmaar Association – and read the amazing full story of how it came about – via www.Bath-Alkmaar.eu
Earlier in the day, a memorial service was held at St Swithins, Bathford to remember Elias Prins and especially his parents and family who were all murdered in the Sobibor concentration camp.
Memorial stones for Eli and his wife Ida are in the graveyard of the church in the village in which they lived.
Children from Bathford Primary School were also at the event.