Bath’s continued faith in its tourist industry is born out by plenty of evidence of new hotel building in the city.

Elsewhere, established businesses are being given make-overs to increase both capacity and appeal. 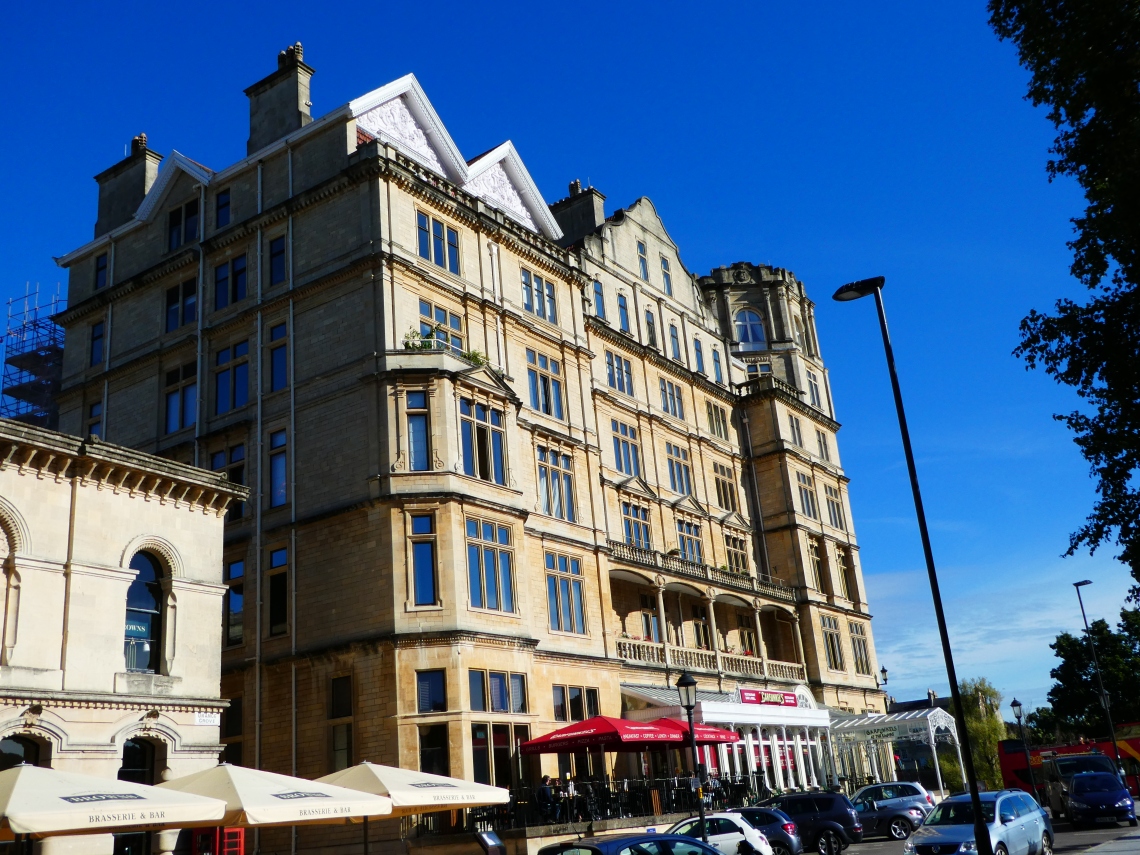 But it’s a hotel from a previous age l want to talk about – and a building that has split public opinion ever since it soared onto the city skyline in 1901.

It’s also one partially obscured by scaffolding at present while repairs are made to the roof and fabric.

The old Empire Hotel – like it or loath it – is described by Michael Forsyth in the Pevsner Architectural Guide to Bath as ‘ an unbelievably pompous piece of architecture.’

It was designed by the Bath City Architect, Major Charles Edward Davis for the hotelier Alfred Holland – a wealthy entrepreneur – and built during 1900/1.

According to Professor Barry Cunliffe – Director of Excavations at Bath for many years – Major Davis was fulfilling a professional dream.

In a paper he wrote – ‘Major Davis: Architect and Antiquarian’ – Professor Cunliffe says of him…

‘Throughout his working life in Bath Davis had two particular ambitions, to create a new road along the Avon between the Orange Grove and Bridge Street, and to build a large hotel.

His several hotel schemes had come to nothing and his plans for a link road failed to receive Council approval on more than one occasion.

At last, at the very end of his life, these two ambitions were realised in the great scheme which saw the erection of the Empire Hotel and its fronting Grand Parade’.

As Professor Cunliffe explained it was the era of mega hotels. Major Davis had already – in the 1880’s – led the uncovering of the city’s Roman baths.

It was a new attraction to encourage people to the spa city and Davis has already missed out on building the new Grand Pump Room Hotel nearby.

‘A wealthy entrepreneur, Mr Alfred Holland, came forward with the money and the hotel company he formed entrusted the task of design to Davis having made clear in approaching the Council that it was ‘taking it for granted that there are no restrictions as to height’.

Davis seems to have been mildly concerned by the problem and did, in fact, go to the trouble to prepare ‘skylines’ showing his proposed new building in relation to those immediately adjacent.

In the event, his seven-storey ‘Jacobean’ monster, crowned with an eclectic ensemble of gables and turrets, towers above the city directly challenging the grandeur of the Abbey and all else’. 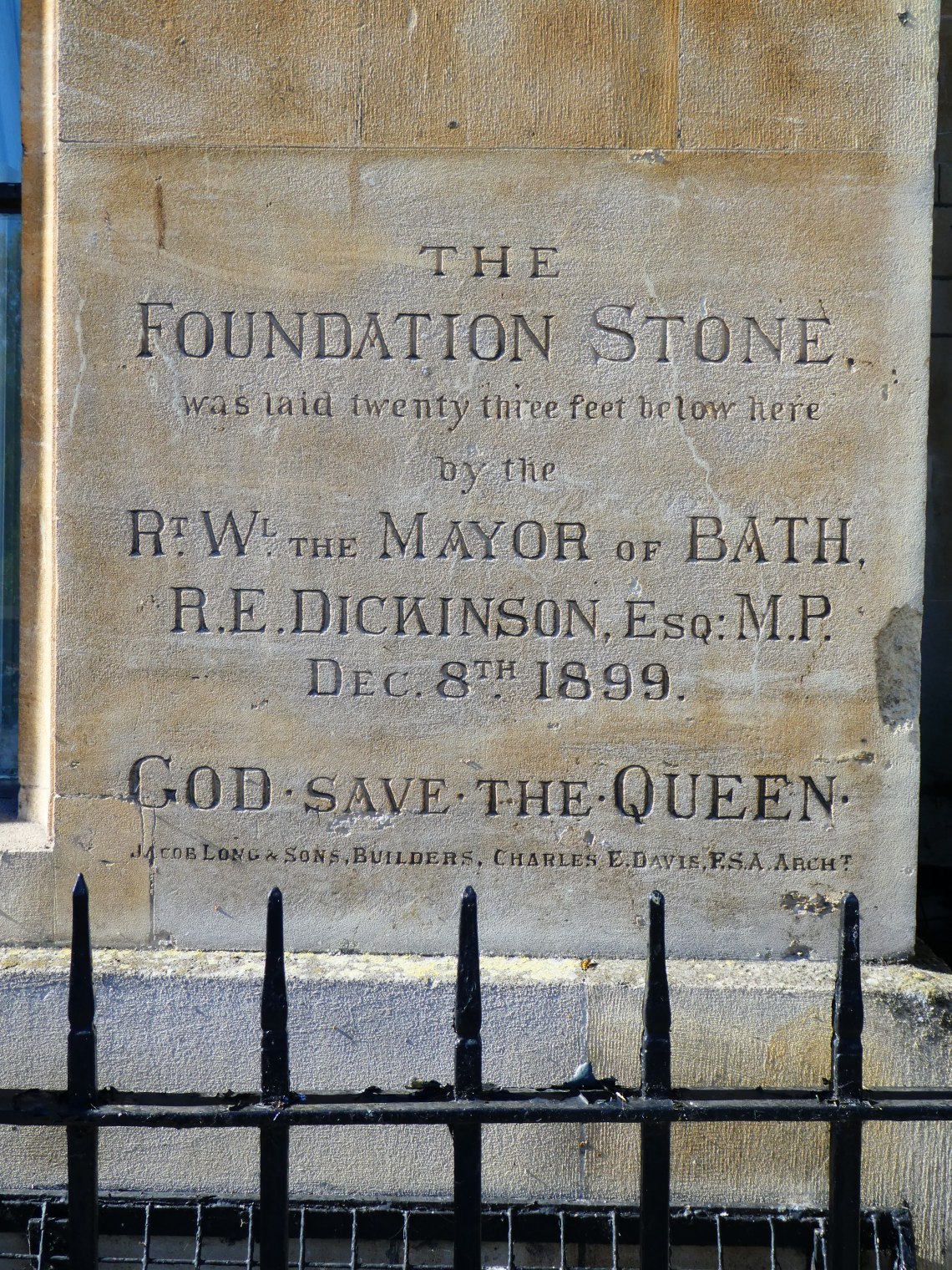 Professor Cunliffe continued: ‘It is fashionable at the moment to treat the Empire Hotel with contempt and ridicule but it has a distinct quality and even a fin-de-siecle charm.

It is the only truly grandiose High Victorian building that Bath can boast and for all its faults the city would be the poorer without it.’

Major Davis died in 1902 – a year after finally building his hotel. He was 75 and had served Bath as its Surveyor of Works for forty years.

The Empire occupies a large L-shaped block. It is six storeys high plus the octagonal corner tower. The front of the building onto Orange Grove has eight bays and the side overlooking the River Avon has nine bays. 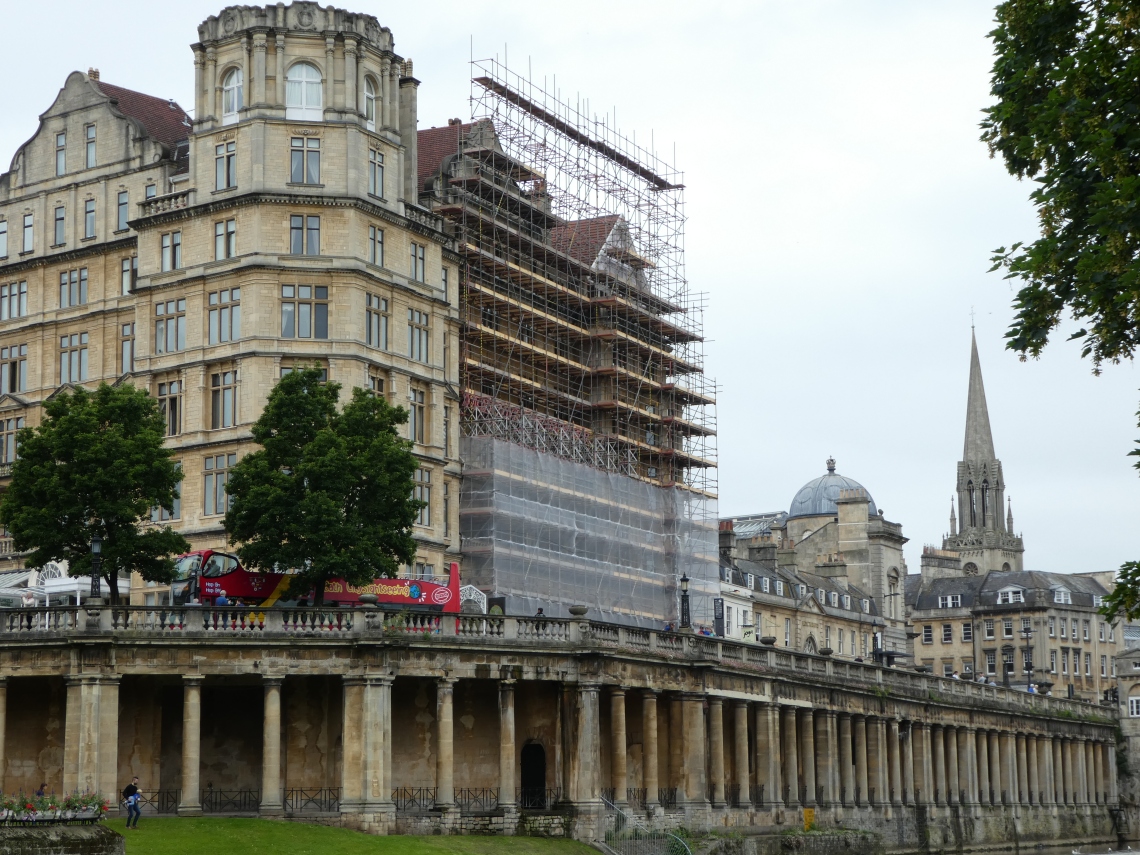 The architecture of the roof shows the three classes of people, Castle on the corner for Upper Class, A House for the Middle classes and a cottage for the lower classes.

During World War 11 it was used by the Admiralty as postal sorting offices and remained in their possession until the 1990s.

It was then was refurbished and became luxury retirement flats and a restaurant.

It is a Grade 11 listed building.

It stands alongside the old Police Station and Lock-up that Davis had built in 1865 – in the Italian palazzo style. A station that functioned as such until 1966 when the new one opened in Manvers Street.

I have a handy little Lumix camera – with an impressive Leica telescopic, telephoto lens – and was able to get some close up details of very worn carvings – just below the parapet – and one appears to have an heraldic animal ‘rampant’ –  that’s standing on one leg.

Meanwhile – on ground level – some detail from the elegant glazed wrought and cast iron canopies by A.J.Taylor – added in 1907. 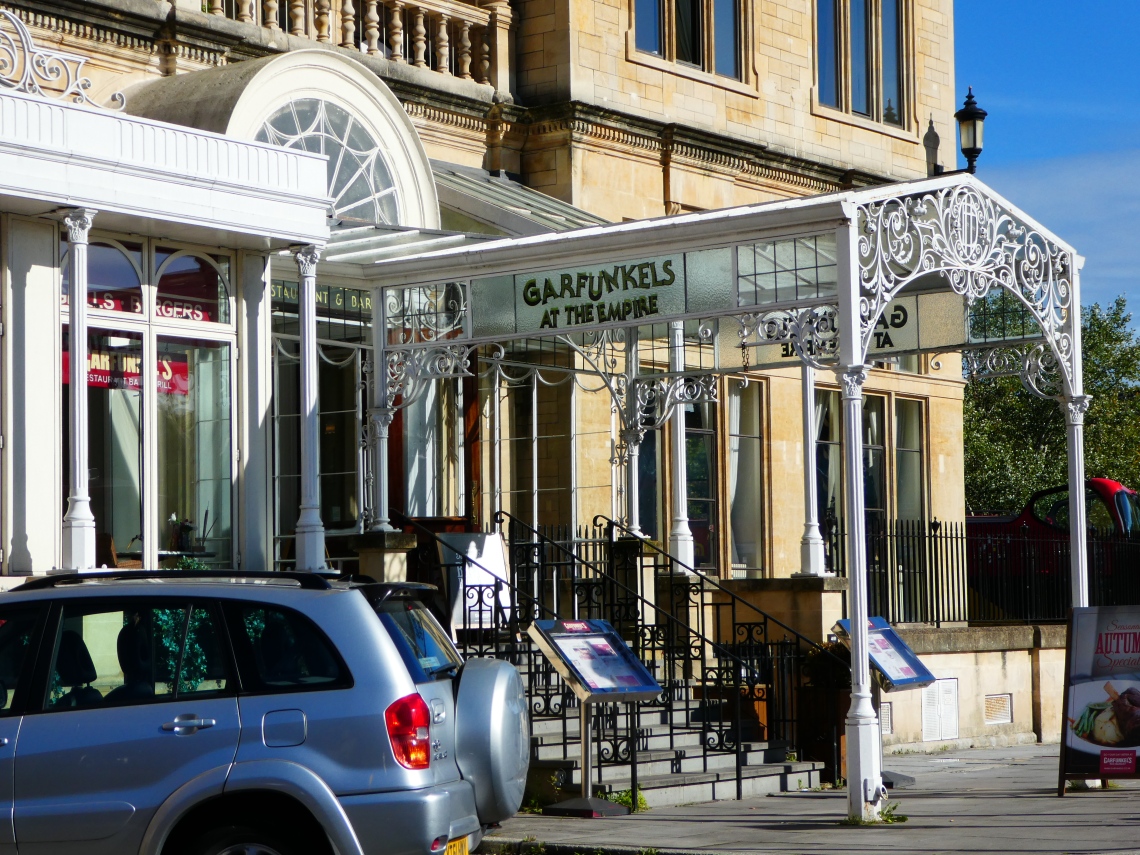 Taylor also did the ornamental canopy over the entrance to The Corridor in the High Street in 1927.

I found the image of a pegasus – a winged divine stallion from Greek mythology. Always depicted as white in colour and according to legend, every time his hoof struck the earth an inspiring  spring burst forth. Is that the reason he is here? Celebrating Bath’s hot and cold springs?

Dan Brown from www.bathintime.co.uk tells me the contractors who did the conversion into luxury flats were called Pegasus. Not quite so romantic eh.

Elsewhere another close up found me trying to make out lettering. Do l see initials here – for Charles Edward Davis?

I think Pete Cashman – a Bath Newseum visitor – is right in suggesting E and H for Empire Hotel!

Certainly the spirit of the man hangs heavily over what remains a grand and confident building of its time.