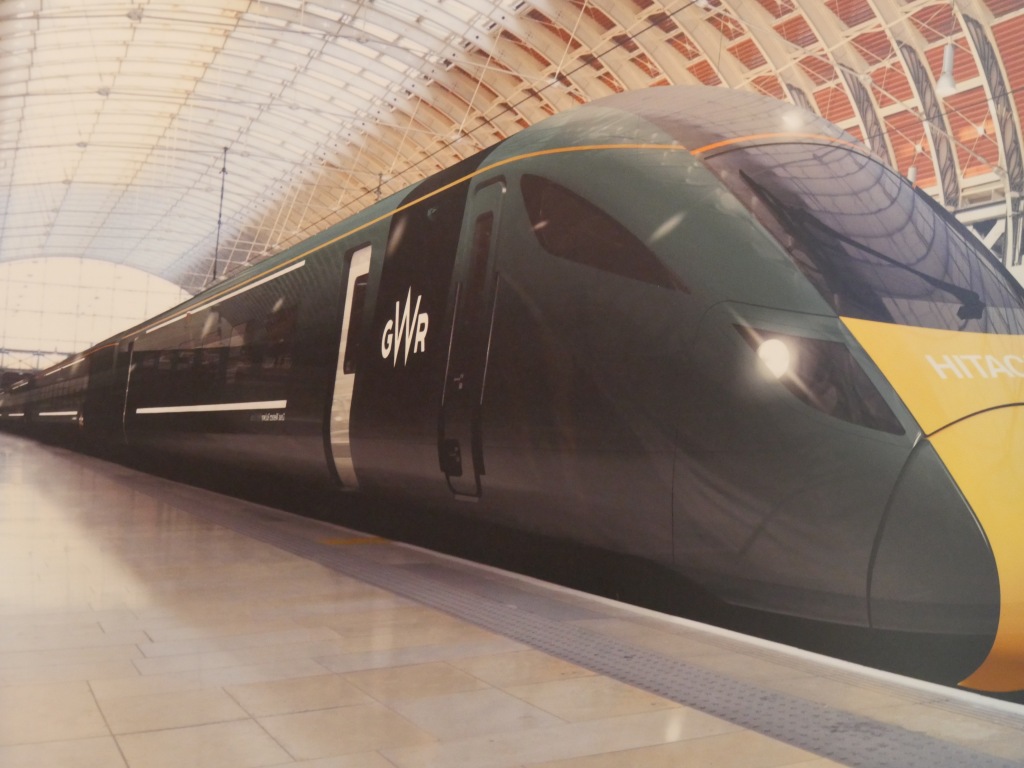 The new 'GWR' livery for the electric engines.

‘We’re about to put Brunel back into his railway’ said the man from First Great Western when we started chatting about his company’s future plans for the historic 175 year old rail route that passes through Bath – from Bristol  – on its way to London.

I was attending one of the monthly consultative ‘updates’ Network Rail – who own and operate Britain’s country-wide web of railways – are holding in Bath’s Guildhall to keep local people up to date with the implications of the rolling out this year of a 7.5 billion pound electrification programme involving the line between Paddington and Temple Meads.

It’s the biggest investment on the 235 miles of track since Brunel built it which – we are told – should see more reliable services with 20 per cent more seats and reduced journey times between Bristol and London of up to 22 minutes.

The trains will be capable of doing 140 mph but will be limited to 125 mph – as are trains everywhere in the UK.

It’s going to cost multiples of millions and on top of that First Great Western – who operate services on this route – will be spending millions more on new rolling stock.

I was shown a mock-up photograph of the Hitachi-made Class 800 train that will be going into service on the electrified line and this is where Brunel gets put ‘back into his railway’ as the engine unit will be painted a dark green – the original colour of the Great Western Railway locomotives – with the logo ‘GWR’ on its side!

These days the only place you will see that is underneath the slats of an old station platform bench!

According to Elaine Arthurs who is an Assistant Curator for Museums and Heritage at the Swindon-based Steam Museum –  http://www.steam-museum.org.uk – ‘The GWR roundel logo was introduced in 1934. It is of a classic art deco design. The one on the side of the ‘FGW engine’ is similar, but not identical. It is great that they are resurrecting the brand!’

I am also told First Great Western staff will also be getting new uniforms to complete the company’s transformation of its image.

All of this lies in the future. Before that Bath will face its fair share of rail disruption as electrification works begins around the city.

One of the big issues for Network Rail is lowering the rail track within Brunel’s amazing Box tunnel. It’s one and seven-eights of a mile long – and will be closed for six weeks this summer – between 18th of July and August 3lst – with trains diverted.

During Phase One – from July 18 to the 31st there will be one high-speed train an hour between Bristol Temple Meads and London Paddington but it will be diverted through Melksham with an additional journey time of 30 minutes.

We’re told Bath Spa station will remain open throughout the works but l am hearing – even here – some alterations will have to be made.

Either the over-head canopy will be cut back or the platform built out further towards the track.

It’s not only rail passengers who will be experiencing this transformation but also users of the city’s historic and very popular Sydney Gardens. They are all that’s left of an original Georgian pleasure garden that Brunel sliced through with his broad-gauge railway. One good reason why  today there is more room to play with around the track on this rail route to London!

This legendary Victorian engineer designed that section as a piece of engineering theatre with an area created which worked like a green auditorium. Spectators could watch and wave to the trains entering stage right from Bath and exiting stage left with a whistle and a hiss of piston-driven steam.

There were original plans for a pavilion where no doubt people could sip their tea and converse in between each smoke-belching mechanical appearance. A polite and very genteel form of early train spotting.

Network Rail say they are keen to preserve as much of the view as is possible – bearing in mind the health and safety issues of   keeping people away from the high-voltage power line and the train-bearing tracks beneath it.

The section through the park will be lowered to get it under the existing bridges – many of them listed –  and a combination of heightened barrier wall and a  new trench alongside will keep people away from the  line.

It will still be possible to stand back and view the passing trains. Bridges crossing the line will have to have some form of barrier on either side of the structure. Just what design will be chosen has not yet been made public.

However one very special Grade 11 * listed bridge in Sydney Gardens is due for special treatment. It’s the last cast-iron, Brunel-designed pedestrian footbridge on the Great Western line.

Network Rail tell me: ‘We are removing the sides of the bridge for sensitive renovation. The bridge deck will be lifted out and replaced with a new structure – the deck currently in place is not the original.’

Another pedestrian bridge a little further along the line towards London is due to disappear. It’s the one leading from the towpath of the Kennet and Avon Canal and across the line to the terraced houses of Hampton Row – behind which lie the soon-to-be restored Cleveland Pools. 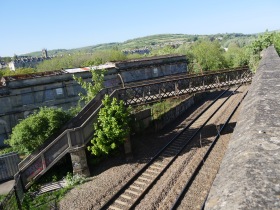 The bridge will be replaced and – say Network Rail – in time not to affect access to the newly regenerated historic remnant of what was an open-air Georgian Lido.

A follower of the Virtual Museum did ask me if l knew what fate the mature willows that stand beside part of the railway viaduct leading out of Bath and   near Churchill Bridge would suffer.

Again health and safety come into play and Network Rail say they have to ‘clear all vegetation up to 6.6 metres or the Network Rail boundary fence (which ever is closest) from the nearest running rail.’

This would certainly involve some pruning at this point. I wonder if the trees have a Tree Preservation Order?

Clearance may be more severe through Sydney Gardens but nothing will happen until after the nesting season.

NR have to be sensitive to environmental and ecological issues. They have the question of nesting bats in Box Tunnel to also consider!

That is where things stand at the moment.

You can follow Network Rail via http://www.networkrail.co.uk/thegreatwestern and the next Bath consultation is due to be held on Tuesday, June 9th between 4 and 7 pm in the Bath Guildhall.

Bath should have its new electrically powered rail connection to London by 2017.

Incidentally some of the new stock will be what’s known as ‘bi-mode’ and are a combination of electric and diesel. That’s to ensure the new trains can still continue on to parts of the network that will still be awaiting electrification.