Well this was a new one for me. On one edge of the village green at Wick in South Gloucestershire. The remains of the first open-air skittle alley l have ever seen! 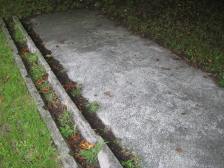 I would not think play was possible now but you can still make out the ‘ball run’ at the side of the ‘alley floor’ for returning the skittle balls to the next player after someone has had a go at knocking pins down. 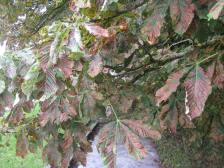 Love to find out more about its origins and indeed – if there are other open air sports facilities like this around our region.

Sad to see nearby mature horse chestnuts affected by the Chestnut Leaf Blotch.

Another unwanted ‘import’ from overseas. Guignardia aesculi was introduced accidentally from North America last century – according to the Royal Horticultural Society‘s website

It is very unsightly and on these beautiful old trees has affected production of normal looking conkers and produced ‘sticky bud’ shoots for next year way ahead of their time? It is unfortunately most common in the South West of England.

I was told by people – gathering in the nearby village hall for a charity ‘table sale’ – that the village was seriously considering felling the trees until being reassured  that they were not endangered by the infection.

Maybe it will be worth sweeping up and burning the leaves – as the fungus seems to spend the winter in them.

I was on my way to tackle the Golden Valley Nature Reserve walk with friends. It follows a route around the old ochre quarry extraction and factory site and is very well laid out. 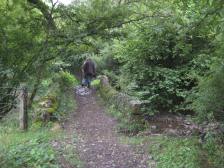 There are a couple of spectacular water-filled quarries in which l hear people do swim. Someone told me one quarry was used by the Georgians!?

There are warning signs about using the waters. So you do so at your own risk. 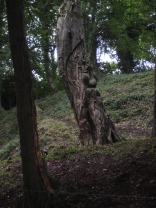 The site is owned by Cemex and managed in partnership with South Gloucestershire Council. See http://www.goldenvalley.org.uk/index.htm