They chose the day with the shortest night to hold one of the most long-awaited re-openings. Yes – No 1 Royal Crescent welcomed back the public after a ribbon-cutting ceremony on the Summer Solstice – June 21st .

Finally visitors get to see what has been done during a major restoration project to reunite the house with its original servants’ wing next door.

The Trust used a generous gift of more than two million pounds to buy back the original servants wing next door.

Twenty months were spent restoring it and another eights months renovating the main house and adding new rooms.

The extended museum – yes extra rooms have been added – will show Georgian life beyond the grand rooms and give visitors  ‘ a vibrant and immersive experience of how people lived 200 years ago – both above and below stairs.’

The house – which is owned by Bath Preservation Trust – has been closed since last October during which time the number of authentically dressed rooms showing how people lived in the late 18th century have been doubled.

First impressions of what the public will get to see are very favourable. I was given a tour – in the company of Ruth Riley from the Visitor Services Department of Bath Fashion Museum.

Our guide was Communications Officer Janey Abbott who explained a little of the history of the house and how its new look has been modelled on notes and diaries left by the first person to live there – a retired Irish MP called Henry Sandford.

We don’t know what he looked like but he made a very good job of describing the house he lived in from 1776 until his death twenty years later – and also wrote about Bath and the world around him.

Two of his books – a scrapbook and diary – are on loan from the National Museum of Ireland. 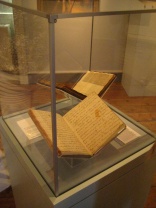 Royal Crescent of course was John Wood the Younger’s Palladian masterpiece. Construction started in 1767 – 13 years after the death of his father – John Wood the Elder – who had planned the curved terrace of 30 houses as the culmination of his grand Lansdown scheme.

Construction started at the No 1 end and , according to Janey, ‘the finished building became a sort of early show house. Giving people an idea of what to expect and it was eventually marketed as a house suitable for a family of distinction.’

Bath Preservation Trust have always furnished the house in Georgian style but the  recent transformation has given it a much more personal touch – as seen through the eyes of its first tenant Henry Sandford.

Newly dressed rooms illustrate his Parlour where he took breakfast, the Gentleman’s Retreat with display cabinets showing Henry’s obsession with recording knowledge through collecting and – where formerly the Preservation Trust housed their archives – a newly created Gentleman’s bedroom with a shaving stand and built in chamber pot! Elegant living but no plumbing. 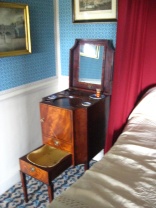 It is a nice touch that you go down to them via the 63 steps making up the servant’s staircase at the back of the house. It’s the way food would have come up and brimming chamber pots carefully carried down!

Below stairs you get to look around the Housekeeper’s Room, Servants Hall, Kitchen and Scullery.

There are some nice touches. The original kitchen – which was laid out in the main house – is now an educational room with a projection screen, boxes of clothes for kids of all ages to try on and where they can meet Reggie the turnspit dog.

It was apparently a big thing in the West Country to use a little dog in a wheel to turn the roasting spit. The mechanism was an effective but cruel way of cooking your roast in an era when the welfare of animals was rarely considered.

Elsewhere in the country a weights and pulley system was used to do the same thing. Reggie will apparently bark to make his presence felt and there will be other ‘sound surprises’ around the house to entertain you. 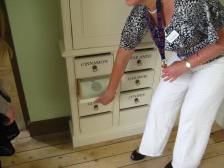 Another nice touch inside the drawers of the housekeeper’s store cupboards which are  marked with the names of herbs and spices – open them and let the youngsters bend down and sniff an authentic scent to go with every label!

In the dining room there’s an opportunity to see an original carpet in a ‘before and after’ arrangement.

Before cleaning the original carpet was photographed and part of that used – with a foam backing – for people to stand on as they view the room. You really do believe it is the real thing! 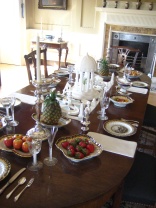 I think the idea of dressing the house as it was when its first occupant lived there is a fantastic way of bringing the place to life and humanizing it. Things seem slightly less formal and much more accessible. There are also items you will be able to handle.

Ticket prices have gone up by two pounds from £6.50 to £8.50 for an adult but, as Janey says ‘ visitors will be getting twice as much to see and lots of visiting businesses who have had a preview have told us we have pitched it at a good rate.’

You get your ticket from just inside the entrance to the Servants’ Wing and in the form of a visiting card. Take it to the main door of No 1 and the housekeeper – one of four ladies playing the costumed role – will take your card and invite you in.

You are free to wander, with your route plan in hand, but in every room there is someone who will answer any questions you have.

There is a great feeling of quality here. It is obvious only the best of materials have been used and as many things as possible are authentic to the period. Many carpets are new but based on Georgian designs and, where fitted, a sign of just how wealthy that first resident was.

Bath’s very own culinary star and  cook-book writer Mary Berry will be cutting the ribbon just before eleven o’clock today. I am told Ab Fab’s Julia Sawalhia should be there along with impressionist-turned-actor Rory Bremner – currently appearing at Bath’s Theatre Royal.

Unfortunately the Trust’s Royal Patron, the Prince of Wales, did not have a window of opportunity in his crowded diary of engagements. I am sure he will get a chance to look around at some point in the near future.

Well done Bath Preservation Trust. The house is back in business in a much more human and engaging way. Something to appeal to all generations. It’s smart and informative, informal and yet authentic, amusing, amazing and enjoyable!