The process by which Bath hopes to acquire the huge hoard of Roman silver coins discovered on a city-centre building site moves a step closer today with an announcement from the British Museum that the coins – having been separated and cleaned – are now being counted!

Part of the Beau Street hoard of Roman coins. Copyright: The British Museum

The hoard – one of the largest ever found in Britain – was declared treasure trove and is technically the property of the Crown. The Roman Baths is intending to acquire the coins but – as part of the acquisition – they are required to raise the money to pay for the reward to which the owner of the land where the hoard was discovered is entitled.

According to Ian Richardson, who is the Treasure Registrar with the Department of Portable Antiquities and Treasure at the British Museum, the reward is ‘based on the market value of the find, and the hoard will be valued by the Treasure Valuation Committee in the near future to determine its market value. Indeed the reason that the hoard has been excavated here at the British Museum is to enable the coins to be properly identified and valued as part of the process.’

In a new blog – http://blog.britishmuseum.org/2013/02/08/the-beau-street-hoard-counting-ancient-money/

Eleanor Ghey and Henry Flynn at the British Museum’s  Department of Coins and Medals tell us they ‘have been able to sort and count seven of the eight Roman money bags contained within the hoard – one is still undergoing conservation. The total so far is 14,646 coins but, as the final bag is large, we expect this to go up to over 16,000 coins.’ 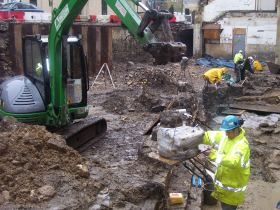 The hoard had to be lifted by a crane as it weighed more than 100 kilos.© Cotswold Archaeology.  Click on any of these images to bring them up to a larger size!

Stephen Clews, the Manager of the Roman Baths and Pump Rooms told the Virtual Museum that ‘ this remarkable hoard of Roman coins was found in Beau Street in November 2007 in the course of archaeological excavations in advance of the conversion of the old Royal United Hospital building into a new spa hotel. ‘

According to the Roman Bath’s website http://www.romanbaths.co.uk/whats_on/beau_street_hoard.aspx the hoard was found in eight leather money bags and dates from 270 AD, a time of great upheaval when the western Roman empire was threatened by civil war and barbarian invasion. Thousands of coins are fused together in a large block, making identification and counting the exact number very difficult.

The first handful from the hoard which is now known to contain over 16,000 coins! © Cotswold Archaeology

A Beau Street hoard ‘collection box’ at the Roman Baths.

With an indication of support already given by the Heritage Lottery Fund the Roman Baths has launched an appeal to raise £150,000 to acquire, conserve and display the hoard. It remains to be seen how accurate that amount will be once the actual valuation has been completed but, if everything goes to plan,the hoard should go on display in the Roman Baths museum in 2014.