With lockdown easing, now is a good time for Bathonians to get out and start appreciating the historical nooks and crannies that lie within their World Heritage city.

I wonder how many know where Bath’s first ‘bypass’ was built? It’s a slightly tongue-in-cheek way of describing the gravel-covered pathway – installed in 1771 – to link Royal Crescent and the Circus with Queen Square further down the hill.

It was a more direct ‘walk’ put in for pedestrians and for the sedan chairmen carrying the city’s visitors between lodgings and the delights that awaited below.

Gravel Walk even got a mention in Jane Austen’s Persuasion as the romantic location for ‘Anne Elliot’ and ‘Captain Wentworth’ to be reconciled.

This footpath has been well-used over its 249-year history and – more recently – has been the subject of much criticism with parked vehicles churning up the surface.

That has been resolved and now the dream is to restored the whole routeway.

But such runaway aspirations have to start with small steps and this is where landscape gardener Sam Selby and his workforce come in.

I found them hard at work with spades and wheelbarrows unveiling a little bit of 18th-century history.

The ‘Barry’  Sam mentions is Professor Barry Gilbertson. He’s a local resident and – pause for breath – is also Chairman of the Advisory Board and World Heritage Enhancement Fund for The City of Bath UNESCO World Heritage Site.

He heads an organisation that is able to fund some modest restorations here and there in the city.

Everything from refreshing stone-carved Georgian street names to helping to restore the Victorian fountain in Hedgemead park.

Barry was keen to show me how busy Sam and his team had been – and l had to chance to ask him how he felt about the city’s economic future as a major tourist centre.

While l was there James helped one of his team to dig down on the other side of the path to check if there might be another buried Georgian gully.

Though cobbles were found they seemed to border a stone coursing that may have been the original edge of the pathway. 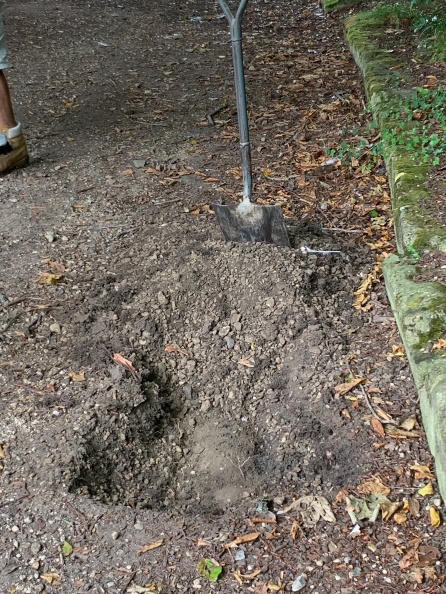 Barry says he’s keen to call into local archaeologists who may be able to carry out a geophysical survey to reveal the original layout of the Georgian gravel walk.