It’s now my understanding that a ‘hold’ has been ordered on any removal of the special planters installed a few years as part of an expensive regeneration plan for the city end of Bath’s polluted London Road.

However, though l have been told they may end up replacing security concrete blocks around the city centre, l have also heard they have a scrap value. The planters are reckoned to have cost five thousand pounds each to install.

The metal troughs – artistically decorated and designed to had an oxidised (rusty) surface – were planted with trees and draped with hanging vines.

Last week many locals were shocked to see many trees had been uprooted and taken away. One had been one cut through with a saw – leaving just the roots.

Local councillor Richard Samuel – one of two people representing the Walcot Ward – told Bath Newseum that a plan to remove the majority of planters out of London Road was turning the clocks back and insulting those who walk or cycle to work. 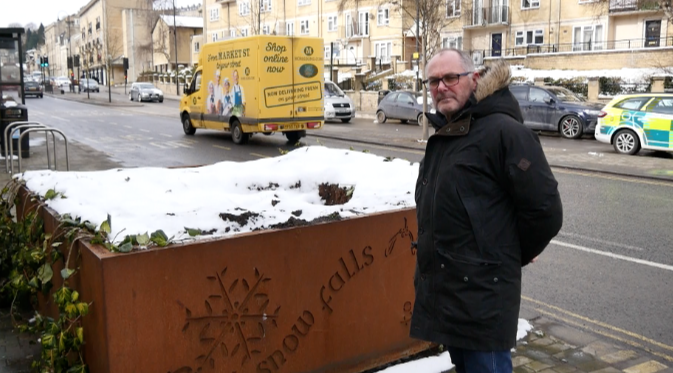 Artistically created they may have been – but ‘safety’ obstruction they turned out to be. That is the explanation Council officers gave Cllr Samuel for the removal of trees and their designer planters and he’s not happy about it either!

He says he wasn’t been kept ‘in the loop’ and was shocked to hear the expensive containers – the work of local artist Jane Veveris Callan – are going to be scrapped.

On her website, Jane includes that work in her CV:

“She was recently commissioned by Bath & North East Somerset Council to create designs that were laser cut onto CorTen steel tree planters and grilles as part of the London Rd Gateway Regeneration Project Bath”.

Meanwhile, cycle campaigner Adam Reynolds has waded in on Twitter with Highway Department plans that – he says – show there has been ‘ no secrecy’ and that the issue ‘has been discussed with many of the stakeholders over the last couple of months.’

Bath Newseum took these pictures on Saturday, March 18th. It shows many of the artist-produced metal planters were without their trees. In one planter the tree had been sawn off!

These ‘tubs’ had been added to the road as part of an expensive ‘greening’ of one of the busiest and most polluted highways in and out of Bath.

We spoke to Cllr Samuel – beside a busy and noisy London Road.

Cllr Samuel mentions an independent safety audit, on the regeneration work, carried out in 2015 – after the scheme had been completed. It draws attention to the positioning of planters either side of side road accesses restricting visibility and recommended ‘that the planters are relocated outside of visibility splays’. The section dealing with this is shown below.

Many people may wonder why it has taken three years to deal with this recommendation and why the solution seems to be to take them away completely rather than relocate on the London Road.

Having read the audit l feel the safety review was far more critical of the combined cycle/footpath arrangement that has never worked properly. The audit recommended actual putting cycle symbols on the cycle portion of the path but that never happened either!

On – Monday, March 19th – artist Jane Ververis Callan – who designed the artwork on the planters – took to Twitter to have her say.

The Council’s officers have been tasked with coming up with a new role for the planters.

One suggestion is to use them to replace some of the ugly concrete security barriers that have been installed around the city – following last year’s Christmas Market.

No trees this time but mini flower beds. Whether they would be enough of a deterrent to hostile vehicular acts would remain to be seen.

Bearing in mind l was told the planters were etched with lines from a Japanese poem and placed sequentially so you could read as you walked along – l am not sure how this will work around the city centre!