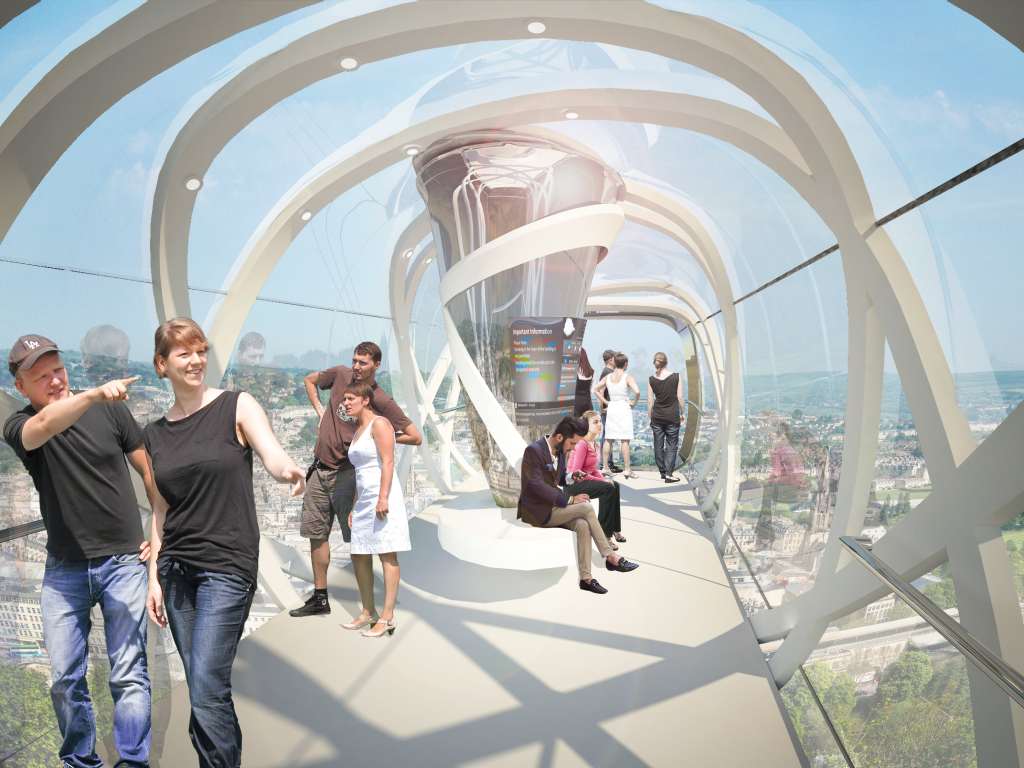 Artist’s impression: view from inside a cable car. Indicative image only.

Bath’s cable car proposal for the south of the city has been abandoned. Bath-based housing association and housebuilder Curo has today published the results of its South Bath Transport Options (SBTO) consultation and has announced that it will not be progressing the project to the next stage.

Housing association and housebuilder Curo has today published the results of its South Bath Transport Options (SBTO) consultation and has announced that it will not be progressing the project to the next stage.

Almost 3,000 responses were received from residents, students, workers and visitors in the city. 91% of respondents agreed that Bath has transport problems which need to be addressed, and 69% agreed with the objectives of the consultation. However, the principle of a cable car was not supported by the majority of respondents.

When asked ‘In principle, do you support the idea of a cable car for south Bath?’ 45% of those responding were either supportive or wanted more details in order to make a decision, while 55% did not support the principle.

Curo’s Chief Executive Victor da Cunha said “We believe that successful communities aren’t just about housing; we started to look into transport solutions because during the master-planning consultation process for Mulberry Park many residents told us that they were concerned about traffic on Bradford Road. Having already made a financial contribution to improve the local bus service, we believed it was important for us to explore whether there was anything further we could do.

“While we remain convinced that a cable car could have made a substantial contribution to improving connectivity in the south of Bath – moving large numbers of people every day, quickly and cheaply, across one of the steepest parts of the city – it’s clear that this view is not shared by the majority of residents and, for that reason, we will not be progressing the project.”

Residents in the ward of Widcombe submitted the highest level of responses to the survey, making up 21% of the total votes received, with 86% of residents in this ward saying they did not agree with the idea as a matter of principle.

Across the rest of the city, the overall opinion was more balanced, with 54% either in support or undecided and 46% not in favour of the principle.

Victor da Cunha adds “While there was a broadly positive response across the rest of Bath, and we have received many supportive messages from local people, businesses and stakeholders, we feel that we don’t have a sufficient mandate to press on to the next stage of the project, which would have been to showcase the design, route and indicative pricing structure for residents to comment on.”

“What’s crystal clear from the results is that people feel that Bath has significant traffic and air quality challenges.

“Those in favour of the principle felt that a cable car would ease pressure on the city’s roads and that it was a forward-thinking scheme. However those against felt that the visual impact of a cable car on Bath’s World Heritage Site and the impact on nearby property meant that it wasn’t an acceptable proposal.

“While we’re not going forward with this idea, I believe the conversation can’t end here. Air pollution and traffic congestion is a substantial problem which will only get worse. As well as causing major health and economic problems, these issues will come to affect the city’s World Heritage status if left unresolved. My view is that it will take brave and innovative solutions, such as the cable car, to solve these challenges and that we all need to work together to tackle the problem and promote a positive, sustainable solution.

“Our hope is that our consultation has, at the very least, helped to create a dialogue across the city about the need for us to think creatively and boldly about the very great challenges we all face. We hope that others build upon it, so that we can come to a shared consensus about which beautifully inventive solutions we must all come to support.”

About Curo: Curo is a housing association and house-builder based in Bath, providing affordable homes and high quality care and support services across the West of England. We manage nearly 13,000 homes and are building hundreds of new homes every year.