Some of the brass badges patients would have worn.

Bath has plenty of museums to celebrate and explore its Roman, Georgian and Victorian pasts but – until quite recently – nothing to reflect its important role as a medical hub.

The city’s thermal waters have helped create and shape its history, with an emphasis on their health-giving qualities and their role in soothing the minds and bodies of the many who have come – over the centuries – in search of a cure for their ailments.

Their use – whether by Romans or Georgians – has left its mark in archaeological ruins and fine 18th-century architecture – which together has helped Bath gain its World Heritage status.

Both periods are well represented in award-winning museums but the medical side of things has never been singled out for special attention. That is – until quite recently. 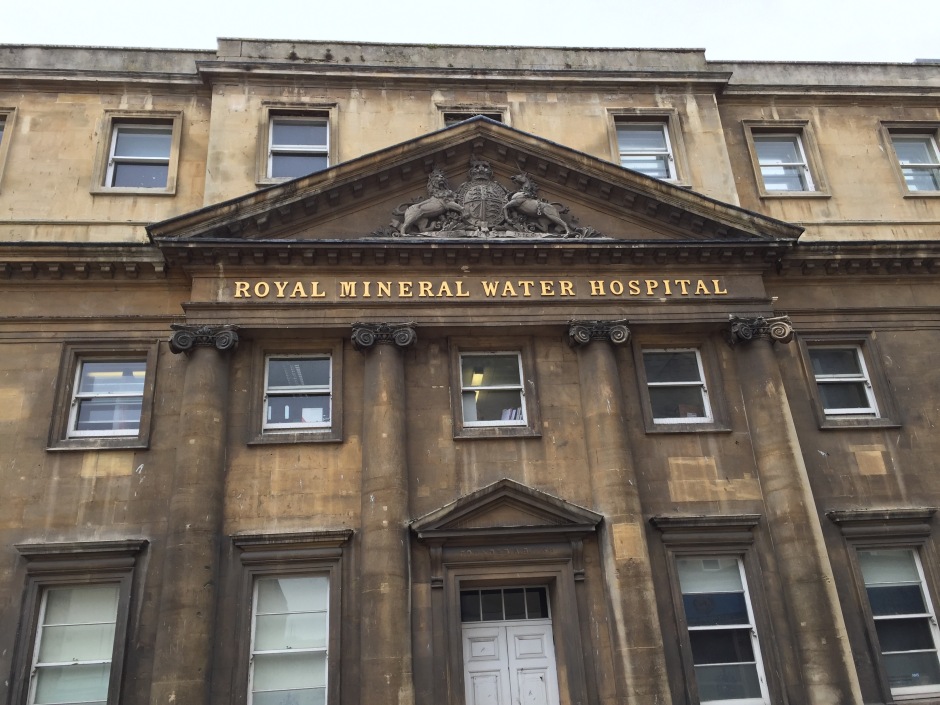 In a much-loved building – which itself played an important role in the city’s social history –  a group of volunteers has established the Bath Medical Museum.

At its core is a remarkable collection of artefacts which tell the history of ‘The Min’. Opened in 1742, it was the first national hospital which took patients from all over the UK. The idea behind its construction was to provide access to treatment in the thermal waters of Bath for the ‘sick poor from Britain and Ireland’.

Opened in 1742, it was the first national hospital which took patients from all over the UK. The idea behind its construction was to provide access to treatment in the thermal waters of Bath for the ‘sick poor from Britain and Ireland’.

In order to cover the cost of sending patients home when their treatment was finished, providing necessary clothing, or burying them if they died, a sum of money (caution money) had to be deposited with the Registrar on admission.

At first, the patients were taken to and from the Corporation Baths for treatment. They wore brass badges (a number of which are still in existence at the Hospital) giving their ward and the number of their bed.

These badges were a `ticket of admission’ to the Corporation Baths. They were also to prevent patients entering public houses and coming back the worse for drink. The Inn Keepers were instructed not to serve patients and risked losing their licence if they did.

A book of patients’ records, the brass badges and even a sedan chair to carry patients with gout bandaged legs are amongst the items on display.

The museum – run by many volunteers who are still out-patients at what is now the Royal National Hospital for Rheumatic Diseases – is getting itself charitable trust status and hoping to extend its medical collection – but there is one BIG problem.

The building is now a NHS Trust but its world-renowned facilities are due to move to a new centre to be purpose-built at the Royal United Hospital.

This means the old Grade 2* listed building is up for sale and could end up as a hotel, department store, offices or restaurant – leaving the Bath Medical Museum without a home.

Bath Newseum spoke to the museum’s Project Director, Dr Roberta Anderson, and asked her why she thought the museum was so important.

The property is being marketed by GVA and their Bristol-based Senior Regional Director, Gordon Isgrove, told me:

‘We are currently in the middle of the tendering exercise so there is not a huge amount I can say. I can confirm that we moved the tender deadline out a little from the original set date (which was 26th April) and we received a number of tenders on the 11th May.

As you would expect for such a prime property, interest was strong and we are reviewing a number of the offers proposals and hope to be in a position to progress the sale forward once we have completed our review over the next 6 weeks.

In relation to price, there was no formal guide price and I can’t comment given the commercially sensitive stage we are at.’

“We are working with our appointed agents on the sale of the RNHRD and are confident that the outcome will be positive, allowing us to further improve services we will provide for patients at the new RNHRD and Therapies Centre at the RUH.

We continue to work with volunteers who have set up the Bath Medical Museum charity, and are loaning them artefacts for ongoing display in the museum’s eventual new home.’

Where that new home will be is anyone’s guess. I have heard other museums have been to inspect what The Min has to offer. Could this be a real Museum of Bath at last? One that could incorporate several individual museums under one roof?

Money would – no doubt – be the deciding factor.

You can check out Bath’s Medical Museum via www.bathmedicalmuseum.org or – because there are server issues at the moment – try https://visitbath.co.uk/things-to-do/bath-medical-museum-p2118253