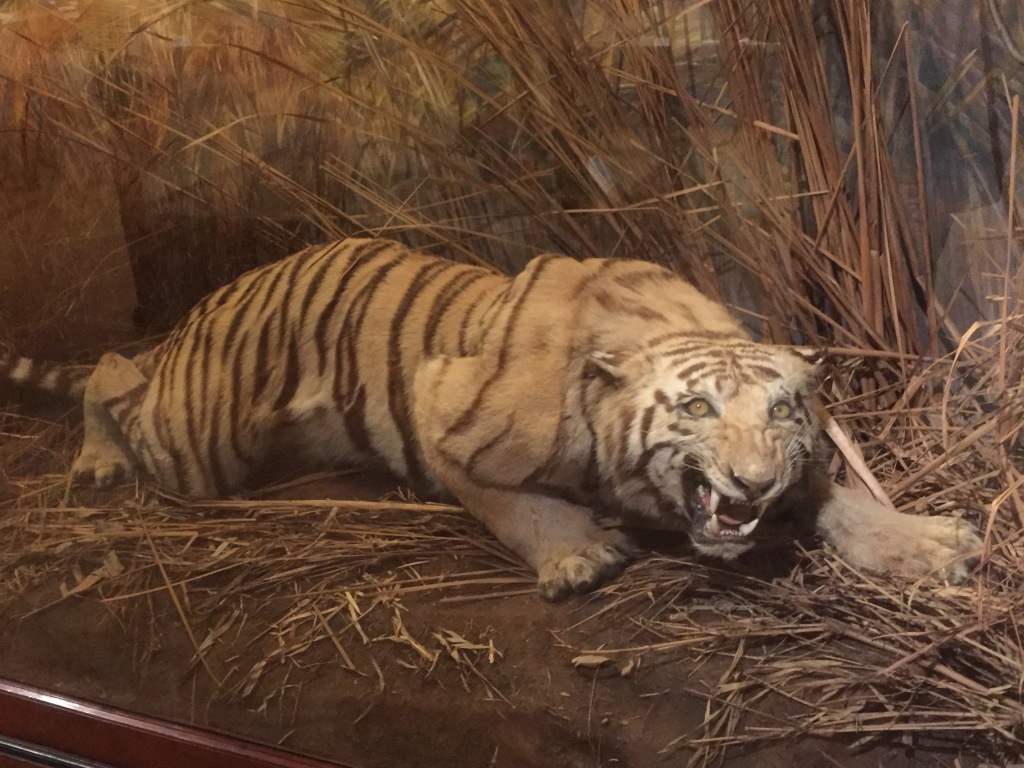 One of my favourite places to visit – in my old home town – is Bristol’s Museum and Art Gallery at the top of Park Street – just to the left of the University’s Wills Tower.

I tackled a Master of Arts degree as a mature student and spent a lot of time in the building as part of my research for writing a dissertation on ‘Museums and Modern Marketing.’

I remain eager to encourage people to see that museums are not mausoleums.

Yes – they may contain the relics of the past but these objects are always ‘in debate’ with the present. They speak to us of where we have come from and what helps make us what we are today.

However, it is a journey sometimes  filled with shame as well as glory.

In terms of human relics – museums are a forum to show us how we have evolved as a species, learned new skills, engaged with our surroundings, expressed ourselves through industry, art, architecture, fashion, warfare and religion.

Also, how we have occupied and ‘cultivated’ the world around us.

Humankind at the centre of all things, but museums also show how this existence is very much a shared environment.

We do not occupy this earth alone and are custodians of its future, and that of our own kind and all other life forms.

With that in mind l want to talk about the museum’s extensive collection of mounted birds and animals – that have passed through the taxidermist’s hands.

In Victorian times taxidermy became a popular form of interior design and decor. Even the Queen had an extensive collection of stuffed birds.

You could argue that nowadays they remain an invaluable teaching aid and enable you to get up close to creatures who in life would not hang around to get inspected.

Though – in the case of larger mammals like a tiger – we can safely ‘admire’ its ‘fearful symmetry’ framed in a spacious vitrine – its menacing ‘snarl’ frozen for eternity behind glass.

In the case of the Bristol Museum tiger we have an illustration of another side to the taxidermy business.

Where ‘hunting’ specimens have proudly been preserved for all to see and – no doubt – admire the ‘sporting’ prowess of the ‘brave’ human who faced  its menace and ferocity from the other end of a rifle barrel.

Generations of young children have – no doubt – been ‘thrilled’ and ‘scared’ in equal measure by being coaxed up to the glass that separates their trembling selves from this wild and untamed jungle beast.

I think it is time to have another debate – using this specimen – to question our relationship with the world and our need to care more for our actions and responsibilities.

Also to make those who we decide should sit upon a raised celebrity pedestal for all to admire – set a better example to their fans.

Much has been said in recent years of Bristol’s ‘shame’ as one of the leading players in the slave trade. How the city’s ships carried thousands of captive peoples  to work in the sugar and tobacco plantations that created the wealth and prosperity of the home port.

I have followed the debate about Edward Colston – the Bristol merchant, city benefactor and slave trader – who had a public statue raised in his honour by the Victorian business community who so admired him as an exemplar of ‘fatherly’ benevolence to those less fortunate in business matters.

I have long been fascinated by how the statue has taken on new meaning during its life in a public space. Red paint and manacles have both been applied to the figure to symbolically shame us into realising where the wealth of this city father of long ago came from.

The object has remained the same but its meaning has changed.

I implore Bristol Museum and Art Gallery to add to the information available – for those who bother to read it – in the area surrounding this tiger – a creature that lived in India until the moment it met its ‘Emperor’.

‘Shot and presented by His Majesty King George V in 1911’ – it says on the case.

Oh – and given to the Museum by Major Clive Wigram – who was in the British Indian Army and the King’s Equerry while he was Prince of Wales.

Same year that the tiger lost its life the newly-promoted major got new braid on his uniform. He remained in the job when George was crowned and became his private secretary too.

There is a small portable notice alongside the case which gives basic tiger details but it is not very up to date. 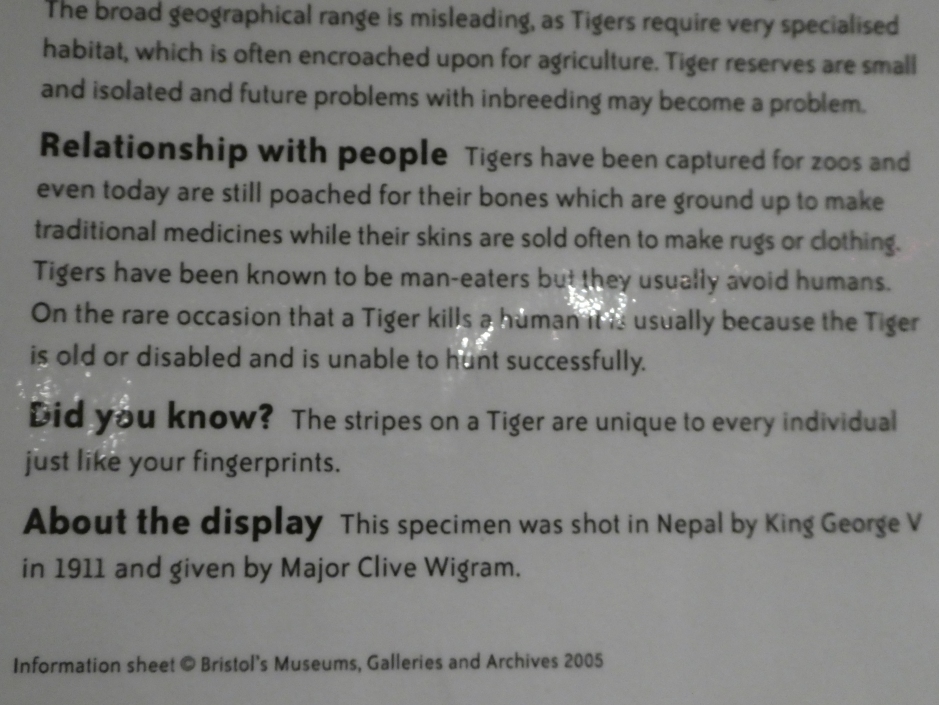 Under Relationship with people it says ‘tigers have been captured by zoos and even today are still poached for their bones which are ground up to make traditional medicines while their skins are sold often to make rugs or clothing.’

Nothing wrong with stating facts, but I think it is time to add some more information and also involve the spectator in some contemporary dialogue about the plight of tigers today and how we feel about the people who hunt them – and indeed hunting and shooting itself.

This animal is one of our most threatened species. While our kings and queens may no longer ride out on imperial elephants to hunt big game that doesn’t mean the world’s wildlife is in any way more safe.

It is important we teach our children well. Whereas a bit of me would rather see all these sad cases and their stuffed victims swept away, another part of me would like the Bengal Tiger moved down and displayed in the entrance hall. Let us come face to face with what humankind is doing to the world.

Meanwhile l know there are certain royals none too happy that fox and deer hunting has been made illegal. They have only their game bird guns to go out and enjoy using in  blasting life out of the skies.

While on the one hand Prince William would like all ivory artefacts taken out from royal palaces and destroyed, he is not averse to take the Duchess out for a shoot.

While he spoke up for endangered species at a World Wildlife symposium, it had not prevented him taking up a previous invitation to go and shoot wild boar and other animals as a guest of the Duke of Westminster in Spain. Oh and Harry was there too.

Incidently, King George’s hunting trips in 1911 bagged 39 tigers, 18 rhinoceroses and four bears. Back home in 1913 he shot over a thousand pheasants out of a total bag of 3937 in just one day.

The Duke of Edinburgh and his son and grandsons continue the tradition.

Elsewhere around the world we have evidence of animals – bred in captivity – and released as targets for game hunters. Look at the sick trophy pictures that circulate on Facebook.

Let’s let the Bristol Museum tiger tell his story and speak for his species before it is too late.