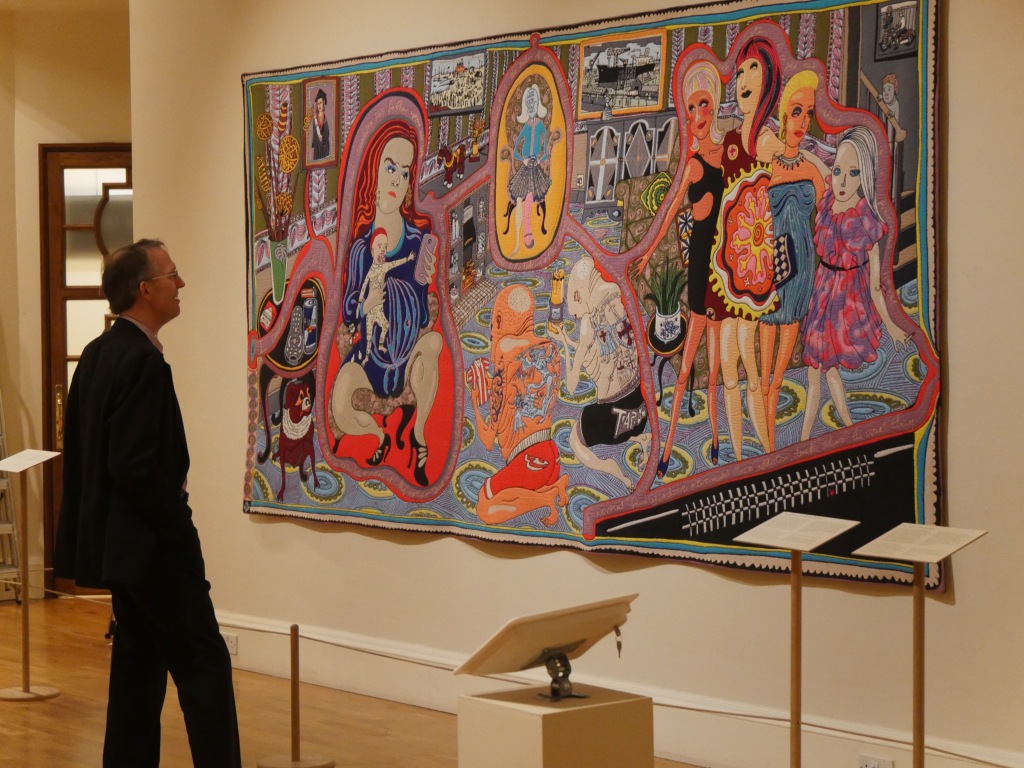 Forget about the wind, rain and grey skies of winter and go step inside Bath’s Victoria Art Gallery to get a ‘fix’ of the brightest and most colourful collection of art we’ve seen in this city for some time.

That’s thanks to the opening  of Grayson Perry’s “The Vanity of Small Differences” – a series of six large, exuberant tapestries that explore the British fascination with taste and class.

The tapestries, measuring 2m x 4m each, were created for the BAFTA award-winning Channel 4 Series All in the Best Possible Taste with Grayson Perry, which first aired in June 2012.

The series followed Perry as he embarked ‘on a safari amongst the taste tribes of Britain’ to gain inspiration for his work.

He’s to visit Bath to talk about it in April at an event that has already sold out!.

Inspired by William Hogarth’s A Rakes Progress, the tapestries chart the ‘class journey’ made by young Tim Rakewell and feature many of the characters, incidents and objects that Perry encountered on journeys through Sunderland, Tunbridge Wells and The Cotswolds for the TV series.

Grayson – the first ceramicist to win the Turner Prize back in 2003 – started working on tapestries in 2009. Once the costly preserve of castles and stately homes and depicting classical myths, religious scenes or epic battles they have been cheekily re-worked to show the dramas of modern British life.

Just like the ancient originals Grayson had his designs woven in Flanders but a contemporary take on an old hand-stitched skill involved Photoshop and a subsequent weaving at a much faster rate on a computer-controlled loom.

The works were gifted to the Arts Council Collection and the British Council by the artist and Victoria Miro Gallery, London, supported by Channel 4 Television, the Art Fund, Sfumato Foundation, and AlixPartners.

Grayson Perry said: “I am hugely pleased and proud that The Vanity of Small Differences will be shared by the Arts Council and British Council Collections because this means the work will be able to travel all around the country and the world. Thanks also to the Art Fund, Sfumato Foundation and Channel 4; their support means the tapestries now have a chance to reach a very wide and varied audience.

Of all the pieces I have made this was the one I conceived from the outset as a public artwork. I hope that wherever it goes it not only delights the eye but also sparks debate about class, taste and British society.” 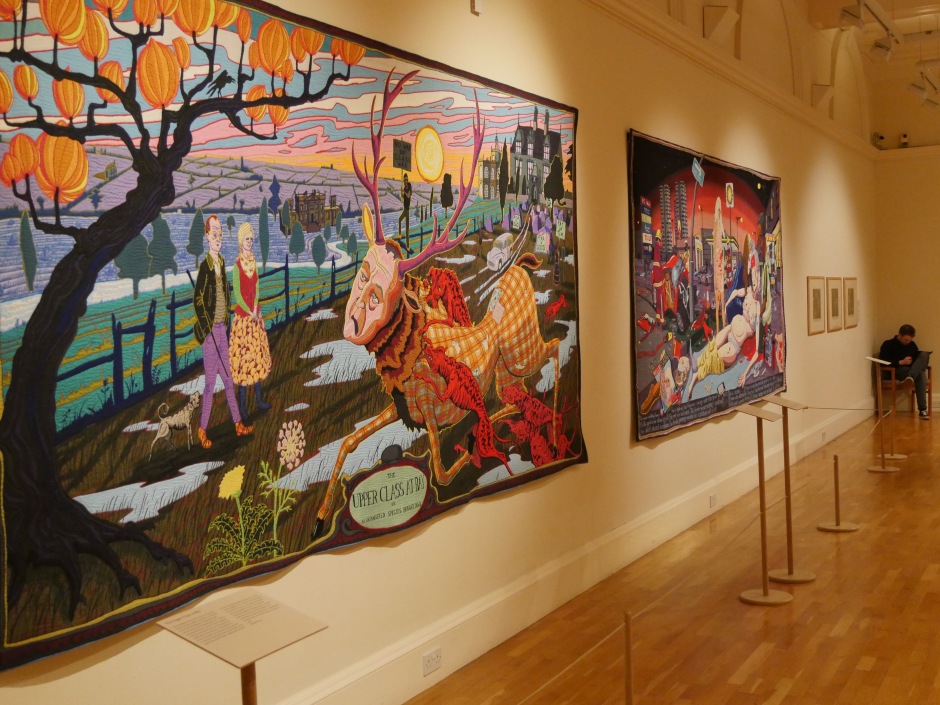 This is the third occasion the Victoria Art Gallery has displayed works created and selected by the former Turner Prize-winner.

In 2009-10 the Gallery hosted the Perry-curated Unpopular Culture exhibition, then just last year it acquired his ‘Map of Days’, a self-portrait in the form of a walled city, for its permanent collection.

Grayson has always said he wants his art to be enjoyable and l challenge anybody not to be drawn into this modern take on a cartoon strip.

Art historians, students and fans may pick out the subtle symbolic references to other artworks of the past but those with no knowledge of the subject will still find themselves appreciating scenes and situations reflecting the world around them. Maybe you’ll find yourself in there too!

Here’s Jon Benington who is the Manager of the Victoria Art Gallery.

Tickets are £4 for adults, £3.50 for seniors and full-time students, and FREE for children and Discovery Card holders.

A fully illustrated hardback catalogue will be available at the Victoria Art Gallery shop, featuring colour reproductions of the tapestries along with photos of the artist’s sketches and preparatory materials. Special exhibition price £14.99 (RRP £17.99).

A pack of six notecards based on the tapestries will also be available from the gallery shop (£7.50).

To accompany the exhibition tour, the Arts Council has launched an app for iPad and iPhone with commentary from the artist, art historical references, a guide to the works and a detailed zoom facility. Available from the App Store (£2.29).

Also, take a look at this BBC clip in which Grayson Perry talks about his art and this exhibition.  https://www.youtube.com/watch?v=0xJ9na63Ljo