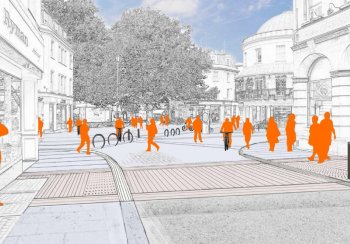 Work starts this week on a £1.2 million project to improve the Seven Dials area of Bath for pedestrians and cyclists.

B&NES has secured the money to pay for the scheme from the Department of Transport’s Cycle City ambition programme. 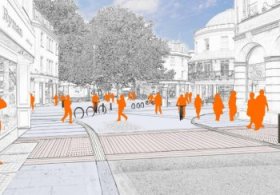 The aim is to improve the public space with more focus on the needs of people walking and cycling through the delivery of a ‘shared space’.

At the moment far more pedestrians than cars use the area around Seven Dials but, because they don’t have sufficient space on the footway, often have to step into the road, putting them at risk. The improvements are designed to remove the idea that motorists have priority and ensure all users can move around safely. Taking such steps to make the area more walkable and cycle-friendly is also an opportunity to invest in the city’s urban fabric.

Benefits will include:
• More space and better facilities for pedestrians. Flush surfaces across the area rather than kerbs thereby improving accessibility, particularly for people with disabilities or those using pushchairs.
• Increased access for cyclists allowing them to cross Seven Dials to take advantage of new contraflow routes being created on surrounding streets.
• Investment in high-quality surface materials that will improve the look of the area which, alongside the forthcoming regeneration of Saw Close, will make it a much more pleasant environment for local people, businesses and visitors.
• New street furniture, public seating and cycle parking.

Seven Dials, incorporating Kingsmead Square and Saw Close, is the historic west gate of the city where seven routes meet and lies to the west of the city’s main thoroughfare.

Cllr Caroline Roberts (Lib-Dem Newbridge), the Council’s Cabinet Member for Transport, said: “This investment is a key element of our strategy which aims to make Bath the UK’s most walkable city. It links to the priorities of the emerging wider transport strategy Getting Around Bath which will emphasise sustainable travel to reduce congestion and support the long-term economic strategy for the area.

“The expanding route network will also support the next bike scheme, launched in July, which is proving extremely popular with visitors and local people.”

The paving improvements will be built in phases throughout the duration of the work which is expected to be completed in June.