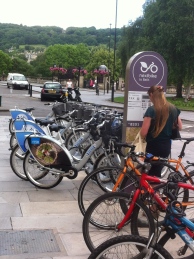 The bikes are available 24 hours a day and users can register and hire bikes in just a couple of minutes. Since its launch in June, the service has been growing in membership and now has around 700 users a month.

Councillor Caroline Roberts (Lib-Dem, Newbridge), the Council’s Cabinet Member for Transport, said: “I’m delighted with the uptake of the scheme which is proving popular with visitors and local residents alike. This will help us in our aim to reduce congestion in the city and in delivering our walking and cycling strategy for Bath.”

Rob Grisdale, Managing Director of nextbike UK said: “It’s been a great launch summer for nextbike in Bath and so far the figures are looking great. We originally expected 500 rentals per month but so far we’ve seen between 650 and 750. We are looking forward to capitalising on this early success and growing the scheme in 2015, both in scale and in ridership.”

Charlotte Taylor, Senior Marketing Manager at Bath Tourism Plus, said: “Last Friday I took five German journalists on a little jaunt up to and through the Two Tunnels. As a keen cyclist, having routes like this on my doorstep is one of the reasons I moved to Bath, but showing these German visitors how easy it is to grab a bike in town and set off on one of the many stunning rides heading out of Bath reminded me that this city and the extensive cycle-friendly pathways and quiet roads surrounding it, is perfect for cyclists of all abilities.”

Residents and visitors to Bath have nine docking station locations to choose from when they hire and return their bike and three new stations will be introduced before spring 2015.

On average users of nextbike hire a bike for just over two hours, with 47% of users preferring to drop the bike at a different location to where they hired it, demonstrating the power of the A-B system.

Users can hire bikes direct from the docking stations on street or by using a mobile-based application. Registration to the scheme is free and each rental costs £1 per half hour. For full subscribers, rentals are free for the first 30 minutes of every rental. There is a maximum charge of £10 per day to allow riders to explore the city and its environs. A lock is provided to enable users to secure the bike during use.

The scheme is operated by nextbike but is part-funded by Bath & North East Somerset Council through the Department of Transport’s Local Sustainable Transport Fund although it is hoped to become self-sufficient within two years.