It was touch and go for a while and a bit of a long wait – wearing hot costumes and in a cramped and crowded Concert Room – but Bath’s annual Jane Austen Festival has  reclaimed its own world record for ‘The Largest Gathering of People Dressed in Regency Costumes’.

It’s happened in a festival week that organisers have described as the most successful ever.

The Guinness World Record was originally set in 2009 by the Festival – held each September in Bath –  when 409 people gathered in the Assembly Rooms – making it the biggest event of its kind in the world.

This July, however, that number was surpassed by 491 American Austen festival-goers in Greater Louisville, as part of an event organised by the Jane Austen Society of North America.

Although this figure has yet to be officially recognised by Guinness, the UK Jane Austen Festival aimed to beat the number achieved by their American counterpart.

And this was the build up today – September 13th – to finding out if they had done it.

People had to register their number and then spend five minutes together in the Concert Room.

Here’s when the count down to the end began.

The record attempt, and the Victory Grand Regency Promenade through Bath to the Parade Gardens was just one of the highlights of what organisers are calling the biggest festival yet in the event’s fourteen year history.

The festival reaches its grand finale this weekend with a host of events catering for all types of Austen aficionados.

On Friday afternoon Austen: a Musical, performed at the Mission Theatre, Corn Street, explores the famous writer’s own, little known, real life romances and struggle to become a published author in a male dominated industry.

This is followed by one of the highlights of the ten-day extravaganza, the Masked Ball at the Pump Rooms. Here, Austen fans who have travelled from across the global to this heritage city can don their finest Regency costumes yet remain anonymous behind Venetian style masks.

On the penultimate day of the festival John Mullan, the well-known Professor of English at University College London and author of ‘What Matters in Jane Austen?’ will share his experience and love of the writer’s work, while later that day, another Austen authority, Maggie Lane, will discuss the colourful creations that were Jane’s widows. Box Tale Soup Theatre Company round off the evening’s entertainment when they present a version of Northanger Abbey that remains faithful to the book and comprises of two actors and seven puppets!

The final day of the festival will see a trio of performances bring to a close what organisers are already calling the most successful festival in its fourteen year history. 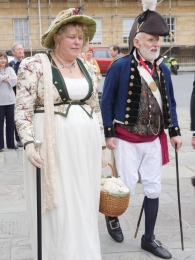 Mansfield Presents is one of the events celebrating 200 years of Austen’s Mansfield Park, which has become her most controversial novel, while Love & Friendship, taken from Austen’s early work – the juvenilia – chronicles the adventures of Laura Talbot, a small-time heroine with big ambitions.

The ever-popular Austentatious then close the festival with undoubtedly one of the most talked-about shows on the improvised comedy circuit.

The festival programme with details of all events mentioned plus more can be found here: http://www.janeaustenfestivalbath.co.uk/festival-programme/