There is no doubt about it – Bath makes money out of its heritage. It can boast some of the best Roman remains in the country and is also home to the Uk’s only hot springs.

Add to that its assorted streets of breathtaking Georgian architecture and you can see why – in 1987 – UNESCO decided the city had earned a World Heritage status rating.

It was the internationally-recognised accolade that put the icing on a cultural cake that is greedily consumed annually by more than four million visitors and which generates an estimated 380 million pounds of tourist income a year.

I say Bath but this city does not have its own unitary status as a local authority – it’s part of a politically-created council called Bath and North East Somerset.

Two hundred and twenty square miles of B&NES-governed territory that  came into being in 1996 when another and bigger beast called Avon was put out of its misery. Bath had been a county borough – it’s own boss – from 1889 through to 1974.

While its coat of arms may not often fly from the Guildhall roof flagpole it is still a city very proud of its history and one that appears much keener these days to take care of its heritage.

The Roman Baths – as l have said – are a money-spinner – and help to trim the rates for every citizen. I have heard them described as  ‘a cash cow’ and without that annual bonus income – council tax would be  appreciably higher. 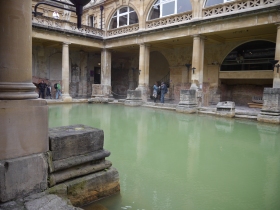 I am a member of the Mayor of Bath’s Corps of Honorary Guides. A bunch of volunteers – well versed in local history – who for 80 years now have been taking visitors around the city to point out and explain the sights – without taking as much as a tip for their troubles.

We have a sense of pride in the place. The local authority knows the World Heritage status is good for business and so is the maintenance and upkeep of all the iconic sites – the Georgian set-pieces – that form the basis for that status being bestowed.

The past has to earn its place in the present these economically-stretched days while state-sponsored gambling helps fund repairs and restorations through the much grander-sounding Heritage Lottery Fund.

Here and there the lack of  public money is beginning to show. Boarding over some of the stone pillars forming the balustrade between the pavement of Grand Parade and Pulteney Weir and Parade Gardens below shows where erosion is making parts of that safety barrier unstable. It may or may not receive attention later this year.

Plans to do much-needed restoration work to the fountain in Laura Place are on hold. Restoration work in Sydney Gardens – the last remaining section in this country of a Georgian pleasure garden – will depend on a green light from the Heritage Lottery Fund This cannot be guaranteed.

Major developments depend on private money or state aid. Western Riverside, the old Green Park Station site, the Stotthert and Pitt derelict works – all depend on corporate money for their business futures.

B&NES bangs on a great deal about its historic heart. A garden city with four hundred years of Roman history, a hundred year’s worth of Georgian indulgence, a treasure-house filled with architectural gems. Photo-opportunities at every corner it would seem.

So – imagine my surprise to find outside the entrance to Bath Preservation Trust’s Georgian House – No 1 Royal Crescent – the first of a line of street stencils in a fluorescent light turquoise green – stretching completely around the pennant stone pavement to Marlborough Buildings.

Street stencils are not new. It’s a way of getting noticed – of publicising your event – using a non-permanent marker that eventually disappears under the tread of countless feet or is washed away in a summer downpour or two.

Well, that’s what the supporters of this trendy new way of promoting your business or event say. I cannot pretend to like them. We have enough mess in our streets without the adult chalked version of children’s hopscotch cropping up every few yards on pavements and paving stones. If this was done on a wall it would be graffiti and illegal.

The pavement markings ARE allowed if you apply to the Council for permission to do them. You will be asked to explain what you are doing and what eco-friendly marking material you intend spraying on your stencils.

This latest marking – evident in Milsom Street as well as Royal Crescent – was to publicise an art event aimed at the family.

A spokesperson for B&NES confirmed that permission had been granted by the Highways Department to use a chalk substance to create markings that would ‘engage visitors to follow the route.’

Hmmm. Well l don’t know if anyone bothered to go out and take a look but they were actually Jester- shaped silhouettes that gave the name of the event and the dates it was running and nothing else. The images were meaningless. They were not clear to read, not leading anywhere in particular and doing nothing for the look of the Royal Crescent.

It looked like kids had vandalised the place – just playing the fool. We haven’t had anything like enough rain to put its erasability to the test but l fear it’s not the chalk but the pigment that will promote a more lingering presence.

I don’t care if this is a refreshingly new way of getting attention. What worries me is that in the wonderful world of higher education – which happened to be the source of this event – it would seem there is an educational lacking in any real appreciation and understanding of what history and heritage is all about. No understanding of it’s important role in today’s society.

This was not enhancing what is a Grade 1 listed area at all. It was defacing it. Confusing our international visitors and giving out mixed messages to children who we always tell not to scribble on walls!

These boring old buildings – that line our congested streets – will one day be passed onto the next generation to care for. Maybe to some of the very same people who cannot see anything wrong with messing up the pennant stone pavements in front of them.

Ironically for me – no protest from Bath Preservation Trust at No 1 – the very body that has so effectively campaigned for and protected so much of the city’s heritage. No one rushed out to throw water over the ‘jester’ in front of their entrance.

Maybe l am a lone voice but l am disappointed that B&NES could not see that  stencils inRoyal Crescent was not a good idea. That some things have to be treated with respect and managed in a way that does not detract from or diminish their iconic power. Smear a mirror and you diminish its reflection.

How you can boast about your World Heritage status on the one hand and then make insensitive decisions like giving permission for these markings on the other.

Meanwhile, around the Guildhall and Orange Grove bright banners have been erected proclaiming and promoting the architectural and historical glories of  Bath. This is the right way of getting noticed. They are smart, colourful and add something to the street scene.

They also come down at the end of the season – like the spent flower baskets that always bring such vitality and freshness to our tourist town during the summer. A little more thought please.

I applaud and would do all that l can to encourage youthful intervention in this city.  We are blessed with two universities and a city college. Young people adding energy, new ideas, a fresh eye but directed in a more positive and enhancing way. With a bit more guidance from the powers that be.

This is a very personal opinion. What do other Virtual Museum visitors think?