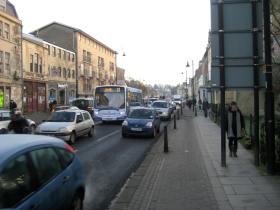 Making Bath the UK’s most walkable city is just one of the aims set out in the Getting Around Bath Transport Strategy which was formally launched by Bath & North East Somerset Council today (Wednesday 30 April) at the Bath City Conference – held in the Guildhall.

It will be considered by Cabinet at their meeting in May following which it will be subject to formal public consultation. The Strategy is a high level review of existing transport policies and commitments in the light of the Council’s housing and economic growth agenda within the city. It looks to develop a set of policies to support this growth and has proposals for:

(3) Supporting greater use of buses and rail to reduce the number of cars entering the city.

(4) Continue to expand our existing P&R sites, where we can, to reduce the number of parking spaces within the city.

(5) Better management of HGVs within the city

(6) Finding a new location for coaches to park once they have dropped off visitors in the city centre.

The Strategy was endorsed by Sir Peter Hendy CBE, Commissioner for Transport for London, at the Bath City Conference and its launch was welcomed by Cllr Caroline Roberts (Lib-Dem, Newbridge), Cabinet Member for Transport, who said: “I would like to thank Sir Peter Hendy for his advice and guidance over the last year in helping us develop our new Transport Strategy for Bath – a strategy which can guide the Council in developing the right interventions to deal with the transport problems we face at the moment and to help accommodate the new jobs and housing which we all agree the city of Bath needs.

We aim to bring this growth forward with the right measures to protect this precious city for future generations.”

Cllr Paul Crossley (Lib-Dem, Southdown), Leader of Council, said: “We’re looking forward to hearing people’s ideas on how to resolve a number of transport issues that affect Bath and the roads in to Bath, so we’re inviting comments from members of the public and businesses.”