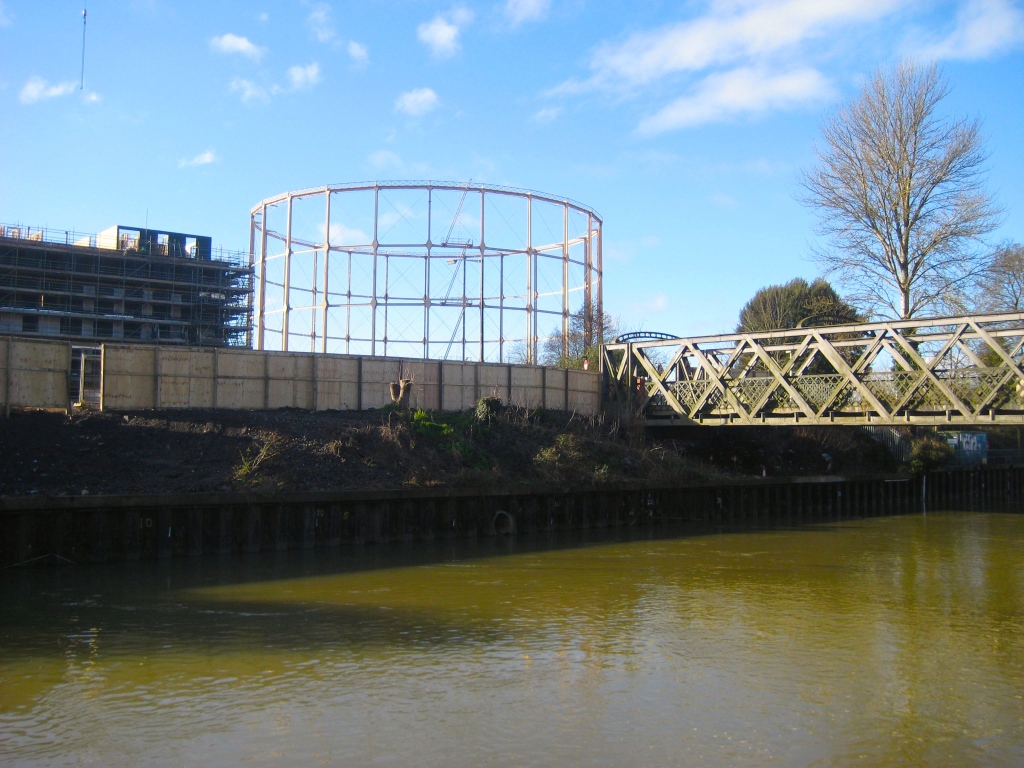 I call this image on the left – taken this morning (Monday, February 9th) during a day-long weather respite from wind and rain and grey skies – Past, Present and Future: An Industrial Triptych.

Let me explain. A triptych is basically a picture or carving on three panels which are hinged together and used as an altarpiece.

It can also mean – in a more general sense – a set of three related artistic works.

it is the more general meaning l evoke here – though my three images are all contained within the one picture. They are also all ‘artistic’ in that they express a creative skill. They were all designed by professional people and engineered to be fit-for-purpose.

On the left is an apartment block which rises on the new Bath Riverside development. The name that has been given to the gradual but grand transformation of a disused industrial site into a residential one. 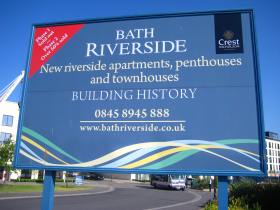 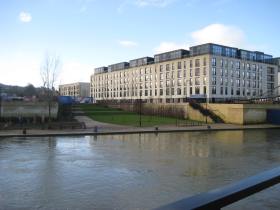 One that also deliberately draws attention to the River Avon – on whose western bank this bustle of building activity is taking place.

Not the best time of the year – l suppose – to be singing the praises of the swift-flowing river running through the centre of Bath.

It is currently doing what is expected of a watercourse continuously topped up by almost constant rain and that is carrying a great deal of water downstream.

It has always been regarded as Bath’s Grand Drain and looked at with dread and concern whenever the floodwaters overflow onto the river’s geographical flood plain.

That is when cycle ways and footpaths are blocked, roads and parkland are awash and owners of residential and industrial properties reach for sandbags and prayers. Perhaps for many the only time the Avon is ever really noticed.

However the river has become a selling point for the new homes. Buyers reassured that they are above the flood plain and -anyway – protected by specially constructed and landscaped catchment areas for the river to overflow into. A useful and not unattractive way of relieving the pressure and protecting other more sensitive parts of the development from flooding.

Those apartment blocks are helping to regenerate a brownfield site. To put order and life back into a deserted and blackened landscape. Its former industrial use will soon be completely forgotten. The land regenerated and occupied now by aspiring couples and happy families.

However the new build is only one of three constructions in that image. The other two are rare architectural examples of the lands previous industrial footprints. 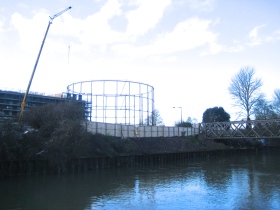 In the middle of our image – its skeletal frame standing out against a rare blue tinged sky – is the outer frame of the last of three gasometers that stood here. Once bloated with Bath-made gas. The circular tank within this last structure has already been punctured – never to rise again. A giant gas-filled lung no longer needed or loved. This year it will be dismantled. Its presence on the skyline – erased.

Completing our triptych of man-made structures is the old Destructor Bridge lying across the river. A road link once belonging to the Midland Railway that was moved to provide access to the old Destructor Plant that incinerated much of the city’s refuse.

Today it is boarded up awaiting the breaker’s men. Destined to be replaced by a wider coat-hangar shaped utilitarian bridge that will carry cars, cyclists and pedestrians to and from this new riverside residential quarter of Bath. The old Destructor had not been designed for such a volume of traffic flow.

It’s hoped decorative scrolls at one end of the bridge might survive to be used as artwork-come-industrial-sculpture somewhere in the city. Maybe forming part of an entrance way for cyclists using the national network route into Bath.

Ironically many of those paths follow industrial pathways laid as iron-tracked highways for smoke-belching steam-driven locomotives.

Maybe even the footprint of the old gasometer could be incorporated somewhere in this new flowering of resident development. A circular open space to mimic the Georgian-built King’s Circus up on Lansdown Hill?

There are those who will mourn the visible passing of the city’s industrial relics. Another word with deep religious meaning.

It is good for me to know the images l have captured this storm-free day – once published – will live on in cyber-space.

I said the picture was called ‘Past, Present and Future’. I like to think it symbolises relics of the past captured for the present – alongside the new building that represents this landscapes architectural and social future. Only one of those structures will be standing at this time next year.

The city – and its history – moves on.