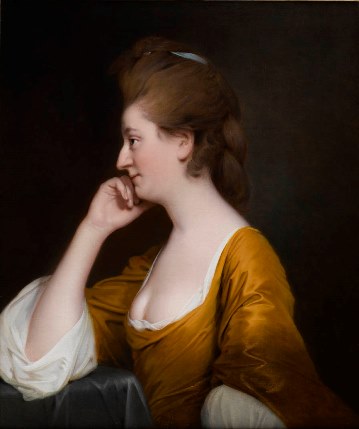 Bath’s Holburne Museum has just acquired its first painting by Derby artist Joseph Wright who lived and worked in the city for a couple of years during the 18th century.

It’s a fine and elegant portrait by Wright (1734-1797) which has been gifted to the Museum under the Cultural Gifts Scheme introduced by the UK Government last year. This is the third gift under this major initiative to encourage philanthropy to UK cultural institutions.

The work will be the first painting by Wright, one of the most significant 18th century British artists, to be acquired by the Holburne Museum. Wright lived and worked in Bath between 1775 and 1777.

The portrait is a notable work by Wright, painted at a time when the artist was at the height of his artistic powers. The portrait is of Elizabeth Balguy (1756-1821) who in 1781 married John Balguy, a lawyer and member of a long-established family in Derbyshire. Wright lived near to the Balguys in Derby and as the artist’s father and brother were also lawyers it is highly likely he would have known the family well.

Between 1780 and 1783 Wright painted a number of portraits and narrative paintings using a similar pose where the sitter’s hand touches her face, however, pure profile portraits such as this were generally reserved for sovereigns, famous men or the deceased. For Wright to paint a woman like this was unusual and is the only known instance in Wright’s oeuvre.

The portrait is being gifted to the nation by David Posnett OBE, who was Chairman of the Holburne Museum between 2000 – 2013 and will be on public display at the Museum from 18 January 2014.

The Holburne Museum houses one of the finest collections of British portraiture outside of London and this painting fills a significant gap in its collection of 18th century art.

David Posnett, said: “With one of the finest collections of 18th century portrait paintings outside London, it was a travesty that the Holburne did not possess any example by one of England’s most beautiful painters, Joseph Wright of Derby, whose very individual work, largely carried out in Derby and for a short period in Bath, as the Holburne’s forthcoming exhibition demonstrates, had a profound effect on me.

“So here, under the new Cultural Gifts Scheme, was an opportunity for me to rectify this absence and at the same time commemorate my chairmanship of the Holburne – one of the most rewarding times of my life – and in doing so I hope to encourage others to make similar gifts under the scheme”

Ed Vaizey, Culture Minister, Department for Culture, Media and Sport, said: “This latest donation under the Cultural Gifts Scheme is great news, particularly as its new home at the Holburne Museum in Bath is where Joseph Wright lived and worked for a short time.

“Thanks to the generosity of donors under the scheme works of art are now being enjoyed by wider audiences benefitting the public and the museums themselves.”

Alan Davey, Chief Executive, Arts Council England, said: “In less than a year the Cultural Gifts Scheme has secured the donation of three important objects of cultural importance for the public – an impressive feat. This generous donation comes hot on the heels of John Lennon’s lyrics and an early Van Gogh painting which were gifted to the British Museum and National Gallery respectively.

“This scheme doesn’t just benefit the institutions which receive these significant objects but, most importantly, it also gives the wider public the opportunity to experience and enjoy them. I hope more people are inspired to donate to this scheme as it develops and grows.”

The gift arrives at the Holburne just before the Museum opens an exhibition of the works of Joseph Wright of Derby, 25 January to 5 May 2014.

Alexander Sturgis, Director of the Holburne said, ‘It is always a huge pleasure to welcome a work into the collection and even more so when they come as a gift. Joseph Wright’s portrait is particularly special and could not be better timed as its arrival coincides with our exhibition exploring this great artist’s time in Bath. It is also an exceptional generous gift from David Posnett who did so much as Chairman of the Holburne to drive through our new building and has now provided a work to hang on its walls.

The Rt Hon Don Foster, MP for Bath commented, “The Cultural Gift Scheme is a great initiative and I am delighted that the Holburne is a major beneficiary of it. David Posnett OBE worked wonders for the museum when he was its Chairman, not least in securing the magnificent extension. It is wonderful that even after stepping down as Chairman, his support continues. The portrait of Elizabeth Balguy will be a fitting complement to the Museum’s Joseph Wright of Derby exhibition. Bath owes a big debt of gratitude to David Posnett.”