On August 1st 1714 George l  became the first monarch of the House of Hanover. So next year – 2014 – it will be 300 years since the beginning of the Georgian era; a period that completely transformed Bath’s society, architecture and history. 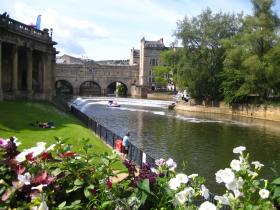 With so much history to explore, the city will be celebrating this influential period throughout the year, and Bath”s tourist information centre – Bath Tourism Plus – has come up with a list of top tips on discovering Bath’s Georgian connections…

A brand new walking tour will begin in the spring to celebrate Bath’s Georgian life and history.  Starting from the official Visitor Information Centre next to Bath Abbey, the walk will include fascinating facts about life in Georgian Bath, its buildings and history, as well as notable Georgian attractions such as the Pump Room and No. 1 Royal Crescent.

Bath has always been a fashionable destination to shop and was the place to be seen in the 18th Century for Georgian fashionistas who flocked to the city to keep up with the latest styles.  Today, Bath is still a popular shopping city thanks to its unusually high number of independent stores and boutiques.

A special exhibition at the Fashion Museum – Georgians: 18th century dress for polite society (25 January 2014 – 1 January 2015) – will present a selection of the finest fashions worn by those attending assemblies and other glittering occasions of 18th century life.  The exhibition will feature over 30 original 18th century outfits and ensembles from the museum’s world-class collection as well as 18th century-inspired fashions by five top fashion designers: Anna Sui, Meadham Kirchhoff, Vivienne Westwood, Stephen Jones, and Alexander McQueen.

The Herschel Museum of Astronomy tells the fascinating story of Bath residents, William Herschel and his sister, Caroline.  William accomplished huge achievements in astronomy, most famously for discovering the planet of Uranus, as did Caroline, who is known as a pioneer female astronomer for her work in discovering nine comets.  The museum is located at the home of William and Caroline on 19 King Street in central Bath.  The house and the garden offer visitors the chance to see a carefully restored, typical Georgian house, as well as the location where the Herschels made their great discoveries.

During the 18th Century, people came to Bath in huge numbers to ‘take the waters’.

It was believed that the natural thermal water could help to cure diseases and so people would visit Bath to bathe and drink the water.  Today’s bathers head to the Thermae Bath Spa.  This modern spa complex combines historic spa buildings with contemporary design and the Spa features an impressive roof-top pool where bathers can soak up wonderful views of Bath’s surrounding cityscape in the only natural thermal springs in the UK.

Bath has a staggering 5,000 listed buildings and offers the most impressive Georgian architecture in the country with iconic sights such as the Royal Crescent and Circus which have been recognised by UNESCO, awarding Bath with its prestigious World Heritage Status.

The Bath Bun was invented by Dr Oliver whose patients loved them so much that their waistlines expanded at an alarming rate so they were quickly replaced with the savoury Bath Oliver biscuit.  The buns were originally a brioche or rich egg and butter dough topped with crushed caraway seed comfits. Today’s Bath bun is made from a sweet yeast dough and often has a sugar lump in the centre.  The Bun is still served in Bath today and can be enjoyed in the Pump Room or in one of the traditional tea rooms near Bath Abbey.

Bath’s most famous resident, Jane Austen, lived in Bath for six years and based two of her novels in the city.  The Jane Austen Centre tells the story of this ever-popular writer, while a free walking tour available on www.visitbath.co.uk takes you to the locations used in Jane’s novels and places she lived and visited.  The annual Jane Austen Festival (12 – 20 September 2014) is a fantastic celebration of Austen’s work and Regency times and offers a packed programme of theatrical events, walking tours, talks and more.

Bath’s legacy to the Georgians can be explored at many of the city’s attractions such as the Fashion Museum, Jane Austen Centre, Herschel Museum of Astronomy and No. 1 Royal Crescent.  No. 1 Royal Crescent recently re-opened following a £5 million restoration project which has seen the main building reunited with its service wing.

The house creates a wonderfully vital picture of life in Georgian Bath with each room an exquisite example of Georgian interior design with authentic furniture, paintings, textiles and carpets. There are also many buildings such as the Pump Room and the Assembly Rooms that are beautifully restored to their original Georgian splendour.

For more information on all of the above and to learn more about Bath’s many Georgian connections, see www.visitbath.co.uk, the official tourism website for Bath and the surrounding area.