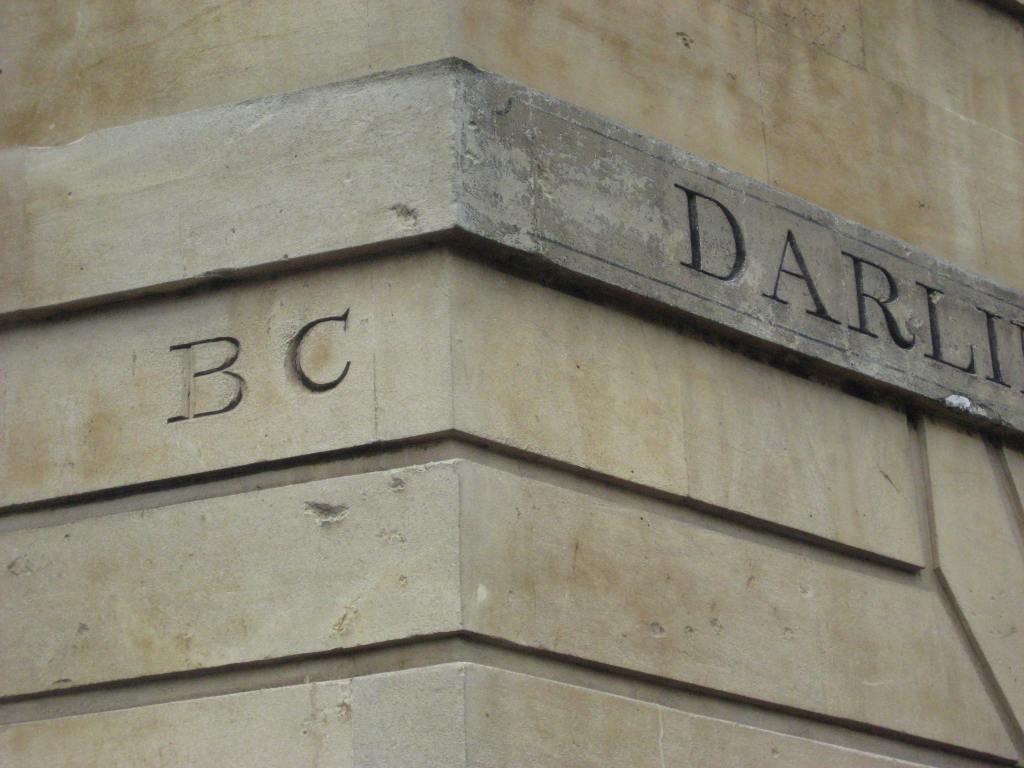 The Virtual Museum bicycle had been dropped off at Take Charge Bikes on Bathwick Hill for essential brake repairs – leaving your Director free to wander for an hour with a camera.

As one who delights in looking up – rather than continually down at a touch-phone or portable video game – l came across an immediate mystery carved in Bath stone at the point where Darlington Street and Vane Street meet.

What do the initials ‘B.C.’ mean and where had l seen them before?

I quickly cleared up the second part of that mystery in nearby Great Pulteney Street where ‘B.C.’ is also carved in the keystone above number 48.

But what do the initials mean and are they carved elsewhere in our World Heritage city? Well my thanks to Andrew Swift – well known local historian and writer –  who sent me an image of another ‘B.C’ – this time at the back of Darlington Place.

Along with Kirstin Elliott – another local history expert and writer – the joint thought is the initials stand for Bath Corporation but could just be Bathwick Church. Kistin says she will do some more checking!

Not all are carved in stone but some are wooden signs like this one for Laura Place – named after Henrietta Laura Pulteney, Countess of Bath and daughter of Sir William Johnstone Pulteney owner and developer of the Bathwick estate.

While nearby Edward Street – one of the major side-turnings from one of Britain’s finest formal streets – appears to have two signs. One after the other.

Double click on any of these images to explore in greater detail.

Another little touch l like – at the other end of Edward Street – is how the people who erected a very fancy mid- 19th century cast-iron veranda – just around the corner – dealt with the problem of obscuring the Vane Street carved sign that one of its supports cuts into.

You will see how the obliterated ‘N’ has been added with a smaller additional letter to the left of the balcony support.

Fred Weatherly (1848-1929) earned his living first as an Oxford coach, then at the Bar but he is best known as a song writer.

He penned over 3,000 but amongst the most memorable are Roses of Picardy and Danny Boy.

While a little further along – towards Great Pulteney Street – l spotted the Prince of Wales’s feathers carved over the door of number 5.

It turns out these were former Duchy of Cornwall offices and now – as The Duchy – a luxury townhouse you can book to stay in!