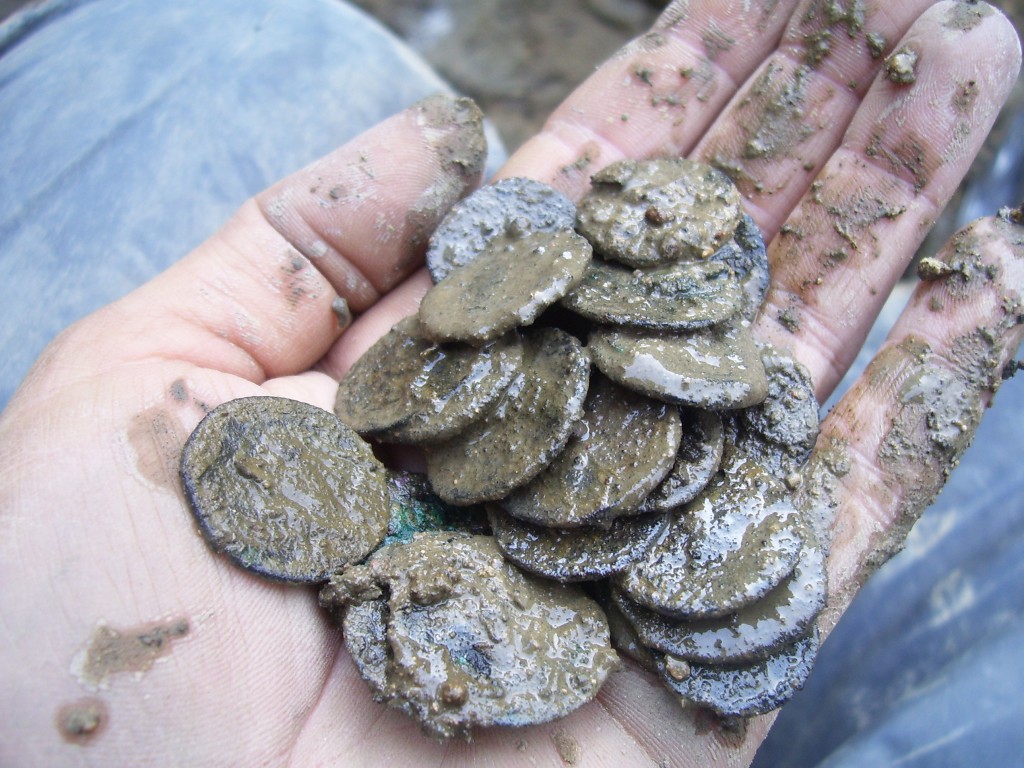 The first handful from the hoard which is now known to contain 17,500 coins.

Primary school children and Bath Rugby players are getting together to help the city raise awareness and  funds to acquire one of the largest hoards of Roman coins every found in the UK.

Next Monday, July 15, more than 50 year 3 Moorlands Junior School pupils will play Roman games in the city centre alongside costumed characters from the Roman Baths and members of Bath Rugby wearing laurel wreaths.

It’s all part of the Council’s fundraising bid to develop a range of activities around one of the largest hoards of Roman coins ever found in this country. They came to light during excavations in the area of the old city hospital – now being transformed into the 5 star Gainsborough Hotel.

The pupils – who have been learning all about the “Beau Street Hoard” with the help of Bath and North East Somerset Council’s Roman Baths team – are the first children to have handled some of the 17,577 coins since 270 AD or earlier.

Councillor Ben Stevens (Lib-Dem, Widcombe), Cabinet Member for Sustainable Development, said: “It’s going to be quite a sight and we encourage as many people as possible to come along to Kingston Parade on 15 July to discover more about this rare find and how they can help us to secure it for future generations to appreciate it.

“Public fundraising is vital to ensure Bath & North East Somerset Council can acquire and display the hoard, keeping it safe and accessible, together with its archive material, at the Roman Baths.

Every pound we raise will bring in an extra four pounds from the Heritage Lottery Fund (HLF) and should enable us to help people enjoy their cultural heritage and increase local learning opportunities right across Bath and North East Somerset.”

The Council was given a £50,000 development grant from the HLF last year. Subject to a second successful funding bid to the HLF later this year, the Council intends to acquire, conserve and display the hoard, as well as develop an extensive programme of learning and community activities centred on the Beau Street Hoard.

Current plans include the preparation of a South West roadshow in which a mobile display would tour towns and villages across Bath and North East Somerset, drop-in conservation days at the Roman Baths, family story-telling activities using the hoard as inspiration and making applications to other bodies for grants to help pay for the hoard.

The second HLF grant would enable the roadshow to happen and help the Council to display the hoard in the Roman Baths.

Karen Lowe, Year 3 teacher at Moorlands Junior School, said: “Being involved in this project gives the pupils from Moorlands Schools Federation a chance to explore lots of new learning opportunities across the curriculum. They have experienced the true history behind the Beau Street Hoard; with a unique opportunity to handle ancient artefacts from our local area.

They’re also improving their Design Technology skills by creating their own Roman coins, similar to the original hoard and will be involved in the recreation of Roman games on the day. We are really looking forward to experiencing what life may have been like for children in Roman times.”

The hoard of 17,577 silver Roman coins was discovered in Beau Street, 150 metres from the Roman Baths.

It contains coins covering a span of at least 300 years, dating to 270 AD. Archaeologists found them in eight decaying pouches, made of animal skin, secreted within a stone-lined pit beneath a Roman building.

The hoard is an important find, archaeologically and historically, and has the potential to develop an understanding of life in Roman Bath and beyond.

Nick Blofeld, Bath Rugby CEO, said: “This is a hugely exciting find, and adds yet another layer to the rich Roman history of this wonderful city. We will certainly support the fundraising efforts of Bath & North East Somerset Council as we feel strongly that these coins should remain here in Bath.

The interest, excitement and learning that surround finds like this will continue long into the future, so we must do all we can.”