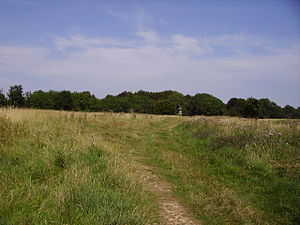 A fund-raising walk around the site of one of the hardest fought battles of the English Civil War is planned for Sunday, July 7th. It includes access to areas not normally accessible to the public and goes through some beautiful countryside with spectacular views.

The battle of  Lansdown Hill near Bath was fought on July 5th 1643 Although the Royalists under Lord Hopton forced the Parliamentarians under Sir William Waller to retreat from their hilltop position, they suffered so many casualties themselves, and were left so disordered and short of ammunition that an injured Hopton was forced to retire.

By this time the Royalists had captured most of the South West of England and were advancing eastwards into Parliamentarian-held territory. Sir William Waller’s army held Bath, to obstruct their further advance.

Attacking Lansdown Hill and charging up the steep slopes towards the Parliamentarian position on the crest, Hopton’s cavalry suffered badly and many panicked. However, under Sir Bevil Grenville, Hopton’s Cornish pikemen stormed Waller’s hill-top positions, while Royalist musketeers outflanked Waller through the woods on each side of his position. Grenville was mortally wounded in hand-to-hand combat as Parliamentarian horse counter-attacked and were driven off.

The Parliamentarians withdrew to Bath overnight. While the day after the battle a Royalist ammunition cart exploded and Hopton was injured and temporarily blinded. The loss of the powder and the absence of most of their horse meant the Royalists could not fight another action.

Pre-booking  is essential. It will cost £10.00 (£7.50 Trust members). Proceeds will be shared between the Trust and Heropreneurs, a UK charity which helps former members of the armed forces set up in business. Have a look at the web-site

Details about the battle, and illustrations, courtesy of Wikipedia, the free on-line encyclopaedia .