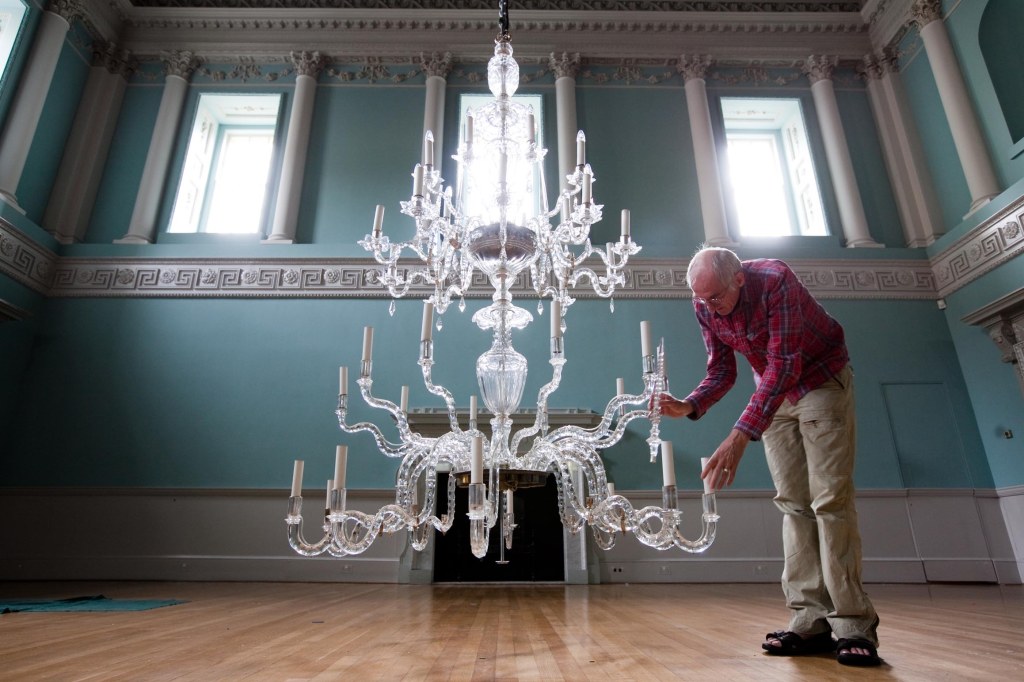 I wonder how many people know how a faulty chandelier in a Bath ballroom came close to ending the career of one of Britain’s greatest artists?

The ballroom in question is set within the Assembly Rooms – a place of entertainment opened in 1771 – to cater for all the people rapidly filling the new homes being built on Lansdown HIll.

People danced, gambled and drank tea beneath a set of nine crystal chandeliers from the Whitefriars Glassworks in London. Today they are considered to be one of the finest sets to have survived from the 18th century and each chandelier is valued at £500,000.

The Bath Season – the agreed time on the  Georgian social calendar when people came to take the waters – ran from October to June. Spanning the dark winter months, and with so many events organised for the evenings, it was obviously important to have good illumination.

Grand ballrooms demanded grandiose displays of lighting. Originally the ballroom contract was given to Jonathan Collett and the tearoom to William Parker – both from London.

Our Mr Collett originally provided a set of five chandeliers for the ballroom which opened in September  1771. The Assembly Rooms designed by John Wood the Younger – by the way.  Shortly afterwards the arm of one of the newly hung chandeliers fell off and narrowly missed the artist Thomas Gainsborough – who lived nearby in The Circus – and must have been dancing below.

The lustres were taken down and the ballroom contract offered instead to William Parker. The Council had wanted to demand  all their money back but – as this would have bankrupted Jonathan Collett – he was allowed to rescue glass from the dismantled chandeliers in the ballroom to construct a single drop to light up all the card games in the Octagon.

The chandeliers in all three very impressive rooms are each an average height of eight feet and were, of course, originally lit by candles. Each chandelier in the ballroom and tearoom held 40 candles and the single drop in the Octagon 48. During evening functions in the 18th century eleven-hour candles were used. This meant they burnt for 7 hours on a ball night but still had four hours for a three-hour concert the next day – allowing for time to arrive and depart.

In Victorian times they were converted to gas and were fixed to the ceiling but, when converted to electricity, they were fitted with a steel cable so they can be lowered for cleaning.

Twice a year they are carefully brought down to floor level and the firm of  Brotheridge Chandeliers of Skelmersdale  – who have looked after the crystal for more than 20 years – has the job of removing each piece of cut glass and dipping them into warm water to which a small amount of mild detergent has been added. They are then dried with a soft cotton cloth and replaced.

The company has fitted new winches which are designed to hold a weight ten times greater than each chandelier. There is no chance of the Assembly Rooms seeing one fall as happened in the classic British television episode of ‘Only Fools and Horses- which many visitors mention!

Just before the outbreak of the Second World War the chandeliers were taken down – along with all the valuable paintings within the Assembly Rooms – and stored in the Combe Down stone mines. We have that precaution to thanks for their survival as the buildings were subsequently gutted by incendiary bombs during the Bath blitz of 1942.

During the refurbishment of the building in 1988-91 the chandeliers were restored by R.Wilkinson and Sons of London.

Originally each chandelier must have had the means of being lowered for candles to be lit or replaced. From 1771 winches must have been operated six times a week to light them and probably 3 or 4 times to remove and insert candles. Why the difference between lighting and changing?  There were ll hour candles available. These were recommended for events which lasted for five hours as they could be used on consecutive days. For the Assembly Rooms, with balls from 6pm until 11pm sharp, they probably burned from 5.30pm to 11.30pm and then were extinguished. Perhaps, on the following night, they would have been used for a concert. As such a musical event started at 7.30pm – the four hours remaining would have been enough.

With each chandelier holding at least 40 candles – if all the chandeliers were lit – a minimum of 400 candles must have been burning at one time. The cost of 11-hour candles was 2s 10d for four. So we have £55 plus for lighting and, multiply that by whatever the inflationary figure is today, and a staggering sum is reached!

Just imagine the heat from three fireplaces and all the candles AND the packed bodies of the assembly!

My thanks to Audrey Woods – a member of the Mayor of Bath’s Corps of Honorary Guides – for much of the information contained in this article. Also to the Fashion Museum via http://www.museumofcostume.co.uk/assemble_rooms/chandeliers.aspx  and to Maggie Bone  who is Museums Publicity Officer for Heritage Services and kindly supplied the photographs.