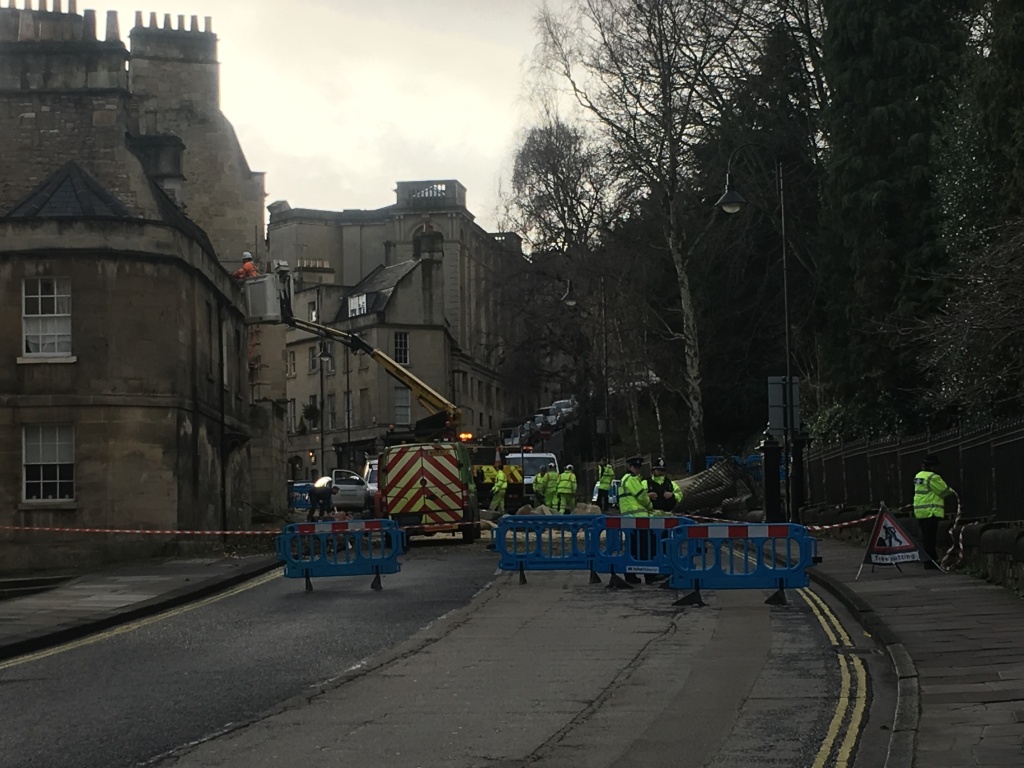 Here’s where Bath Newseum wishes its followers the compliments of the season. I have to say December is drawing to a close with the sort of Christmas bashes the city could well do without.

Starting with a tree down on the edge of Hedgemead Park today (December 23rd) which meant the closure of the road through the Paragon. Thanks to Fred Edwards for the image!

Fair bit of damage to the roof of a house on the other side of the road but no news of injuries.

Meanwhile, we’ve what’s left of the Laura Place fountain looking rather sad as the year draws to a close. A few months ago, a car did some considerable damage to the edge of its bowl.

Then – more recently – came the lorry sending part of the Grand Parade balustrade onto the weir below and next –  Ironart’s flower structure in the middle of the island at the bottom of Bathwick Hill also getting knocked out of true after being hit by a car.

Hopefully, B&NES may have some general insurance cover that will get all three put right as soon as possible but l have my doubts about the long term future of the crumbling fountain – not to mention the state of the road around it.

Next year will also dawn with many of the city’s historic buildings still under threat and some businesses facing an uncertain future.

Jolly’s in Milsom Street is still under threat with no official announcement about its long-term business future.

The old King Edward’s School in Broad Street has lain empty for years. There’s talk that its brewery owners may be putting in a new planning application next year but – this has all happened before.

Bath’s world-famous Fashion Museum has to find a new home with the Assembly Room owners – the National Trust – announcing its ‘new vision’ for the building’s basement area early in the new year.

The old Corn Market still lies empty. Its scaffolding must be Grade 1 listed by now.

Meanwhile the local authority has to approve plans for the old Mineral Water Hospital’s transformation into an hotel, Bath City FC’s re-development and also the Bath Rugby stadium plans – with or without an underground car park.

On the positive side the Bath Quays site will be buzzing – with a new pedestrian bridge in place by the end of the year? There’s also restoration work to look forward to at Cleveland Pools and in Sydney Gardens.

I see they’re packing away Christmas already down in Southgate with the dismantling of the inflatable snow globe that has been helping to entertain shoppers – but at least the carousel is back and there are all those SALES to enjoy too.